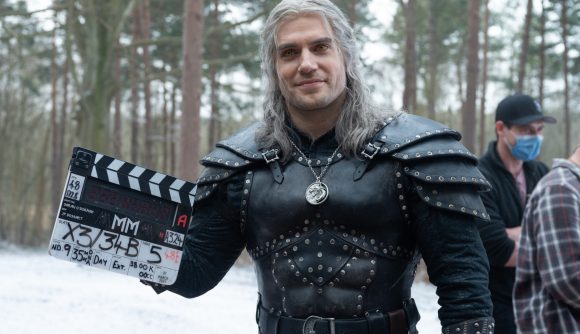 April 2, 2021 Netflix has confirmed that filming on The Witcher Season 2 has come to a close.

There’s no sign of a Witcher Season 2 release date just yet, but we know that’s it’s marching ever closer, as Netflix has confirmed that filming on the new season has come to a close.

Early word on the end of filming started to slip out this week, and Netflix made it official earlier today. In a tweet, Netflix says “That’s a wrap on Season 2! The White Wolf awaits you back on The Continent”. An image of an extremely pleased-looking Henry Cavill with a clapperboard is attached, too.

This official report came after signs come from several sources, including hair and makeup artist on the show – which is based on The Witcher book series by Andrzej Sapkowski –  Jacqueline Rathore. The artist has posted an Instagram story revealing that the decks – well, corkboards – have been cleared on the series, and that, as of March 31, the Season 2 filming is done.

Additionally, fan account Redanian Intelligence, which reports on all the show’s developments and happenings, has posted images of gifts Geralt actor Henry Cavill has sent to the cast and crew. This is something the actor’s known to do on each of his projects, such as when filming on Man from UNCLE wrapped, and this time includes signed pictures, a message, and an ornament depicting the show’s logo. Likewise, fan account Witchernetflxtv has posted on Twitter that Season 2 filming has “officially wrapped”.

That's a wrap on Season 2! The White Wolf awaits you back on The Continent. pic.twitter.com/SqrAbeelob

While we don’t yet know when Season 2 will hit our screens, we do have a good idea of what’s coming. Back in October, Netflix teased The Witcher Season 2’s plot: “Convinced Yennefer’s life was lost at the Battle of Sodden, Geralt of Rivia brings Princess Cirilla to the safest place he knows, his childhood home of Kaer Morhen. While the Continent’s kings, elves, humans, and demons strive for supremacy outside its walls, he must protect the girl from something far more dangerous: the mysterious power she possesses inside”.

That's a wrap on #TheWitcher Season 2!

We’ve also recently seen photos emerge from set of what looks like The Wild Hunt (who Witcher 3 fans will be all too aware of), along with cast announcements from Netflix. The second series will see characters such as sorceress Philippa Eilhart, head of the Redanian Intelligence (the in-universe organisation, not the fan site) Dijkstra, priestess of Melitele Nenneke, major book antagonist Rience, Codringher and Fenn (a pair of shady detectives), and original newcomer Ba’lian join the line-up.

If you’re keen to gobble up every morsel of news about the show’s second season, the Redanian Intelligence site would be a good place to head to. If you’re on the lookout for some great fantasy games, RPG games, or open-world games to play while you wait for Season 2 to drop, you know where to click.