The creator of Braid, Jonathan Blow, has revealed that his upcoming puzzle game, The Witness, will tell its story via audio logs, though players may have to read between the lines to piece things together and answer the burning questions. Questions like: What is this island? Who created it? And why did they fill it with dodgy hacking minigames?

The Witness is an indie game, and it might even be good. Will it be good enough to make it onto our list of the best indie games on PC? Place your bets now. Banzaiiiiiiii.

“The Witness deliberately riffs on several traditional elements of game design, and one of those elements is the classic audio log, where you are wandering along and you find a recording that was placed there by someone before,” writes Jonathan Blow on the PlayStation Blog.

“The Witness has recordings like this, but let’s just say they are done in a highly non-traditional way. When you first encounter them you won’t find much in the way of answers, but, if you keep looking, you will eventually be able to piece together what’s going on.”

Obviously these audio recordings need some voices, so Blow also took this opportunity to reveal the veteran voice talent lending their silky tones to the game. 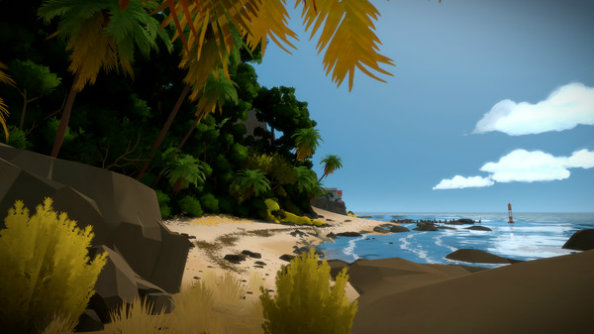 There’sAshley Johnson, most famous for her role as Ellie in The Last of Us, or that lady who says how amazing Captain America is towards the end of the first Avengers film.

Vamp from Metal Gear Solid 2 is also making an appearance. Well,Phil LaMarr, his voice actor is. There’s alsoMatthew Waterson, best known in PlayStation land for his role as Sir Lucan in The Order: 1886.

Lastly, there’sTerra Deva, a voice actor I’m not familiar with, but apparently she was in the Mickey Mouse Club – you know, the Hell portal that spawned Justin Timberlake and Christina Aguilera, among other abomin… stars. I only jest, I’m sure she’s lovely, great at what she does, and totally not from a nightmarish alternate dimension.

Don’t think that incredible voice talent means you’re going to get spoon-fed the story, though. According to Blow, the story “is fairly subtle and happens mostly implicitly” – you have to “explore and read between the lines”.

It sounds interesting. I just hope it isn’t undermined by repetition in the puzzles, but Braid managed to deliver new ideas across its runtime so I’ll hold my judgement for now.

The Witness releases at an unspecified time this month.