The Wolf Among Us was the first Telltale series to land after the studio’s Walking Dead adaptation made them a household name. Somehow, under all that pressure, it delivered – a stylish, socially conscious thriller that followed fairy tale creatures in New York.

What other comics should Telltale turn into adventure games? Have a look at our top five picks.

In the years since, however, it’s been set aside while Telltale take their pick of the biggest licenses in town: Minecraft, Game of Thrones, Batman, and, er, Borderlands. Now, finally, the studio have announced a second season, due next year, and built around a new mystery. Where could it go? The Wolf Among Us fan Jeremy ‘Bigby’ Peel and Fables comic scholar Matt Purslow discuss the surprisingly varied possibilities. 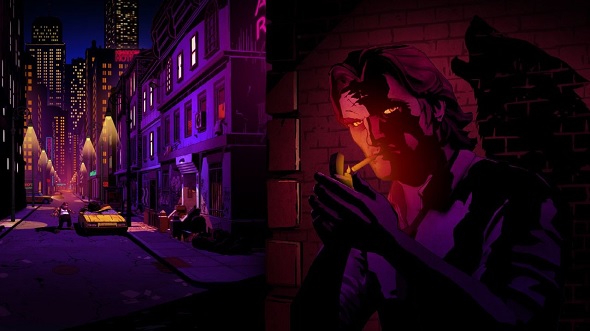 Jeremy: Hey Matt! I was going to start by asking if you’d heard the news about a second season of The Wolf Among Us, for appearance’s sake, but I know you have – comics and Telltale is the confluence of two of your favourite things, right?

Matt: Pretty much! Outside of working in games, comics are something I’m pretty deeply interested in. I’ve read a fair bit of Fables, the series The Wolf Among Us is based on, so I’m quite excited to see where Telltale take the story next.

Jeremy: Me too! It’s a nice surprise, right? Production on The Wolf Among Us: Season One, as I guess we’re going to have to start calling it, began before Telltale’s The Walking Dead blew up. And since then, the studio’s been able to play with the bigger boys in comics: Marvel and DC. I gather that Fables is well known – I’ve seen it on the shelves at Waterstones – but the fact that Telltale chose not to include the name in their game’s title seems pretty telling. 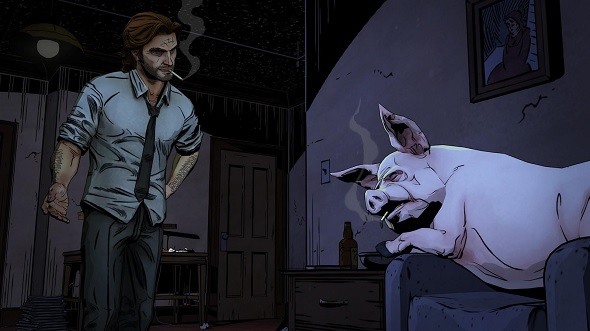 Matt: It’s not up there with the likes of Batman and The Avengers in terms of general knowledge, but if you’re part of the comics sphere you’ll likely have heard of Bill Willingham’s multi-year epic. It’s well regarded by enough people for there to have been a failed NBC TV adaptation (the channel would eventually go on to make Grimm, the police procedural with fairies in, which I expect isn’t a massive coincidence) and an in-the-works movie, but the name change is largely down to making sure people don’t mix it up with Lionhead’s Fable. I also like to think it’s partly because the game is its own slice of the universe; it’s a prequel to Fables, and has a very distinct feel.

Jeremy: Oh! I had no idea that’s what Grimm was. See, this is interesting, ‘cos I’ve played all of The Wolf Among Us to date and have a fairly specific idea of what its world is: it’s a moody detective story about fairy tale creatures slumming it in Manhattan. It stars the Big Bad Wolf – or to use his NY-friendly name, Bigby Wolf – but paints a pretty uncompromising picture of social deprivation in between a lot of murder, tension, and intrigue. It really doesn’t pull any punches (unless you fail your bar fight QTEs, har har har).

But from what you’ve told me in the past, I gather Fables isn’t just that. In fact, it’s been lots of different things in different genres? Please explain.

Matt: In the earliest years of the comic, Fables changes from story to story. For example, the first arc, Legends in Exile, is a murder mystery, but it’s far closer to an Agatha Christie novel than the gumshoe detective feel that The Wolf Among Us goes for. The follow-up story is a conspiracy thriller, while the third arc was a caper. Fables was ever-changing for years, with grand war stories interspaced with thoughtful one-off tales that explored the mythology of creatures from other cultures.

It’s also very funny, which is not something you can really tell from The Wolf Among Us. There’s a tonne of comedy in there, from the very dry lines that Bigby drops into conversation, to the absurd plans devised by the creatures on The Farm (a secret area up-state where non-human fables are stashed away).

The comic settles into a house style later on, but I like that The Wolf Among Us carved out it’s own look and style. It feels true to what Fables was at that point in the timeline (both as a comic, and the atmosphere among the uneasy fables community), and I’m excited to see if it changes in a second season. 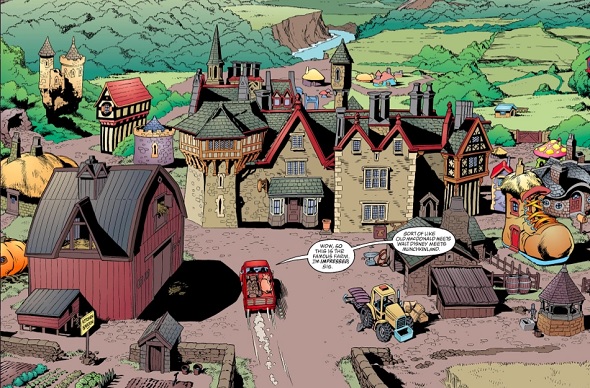 The Farm as it appears in Fables Vol. 2: Animal Farm, via Vertigo Comics

Jeremy: OMG. In my mind, The Farm is a faraway place associated only with tragedy and poverty. Turns out I’ve been living Sad Fables when it could’ve been a load of laughs.

Matt: Well, it’s definitely that, but I guess when you’re locked inside it you have to have a few lols.

Jeremy: The Wolf Among Us: Lols at The Farm. So Season Two could be almost anything and still fit comfortably within the bounds of license? That’s a bit discombobulating, but also exciting. I do feel as if Telltale have growly crime scene investigation sewn up at the moment with Batman back for a second round. Could The Wolf Among Us conceivably return as something that tickles Telltale’s comic instincts instead, do you think? Tales from the Borderlands was legitimately lolsome, after all.

Matt: Absolutely, although they’d have to be careful with how they did it. Fables still covers grimier themes even when it’s being funny. Bag ‘O Bones, for instance, is about Jack Horner attempting to cheat Death. There are some genuinely hilarious moments, but they’re all wrapped up in the twisted subject matter. 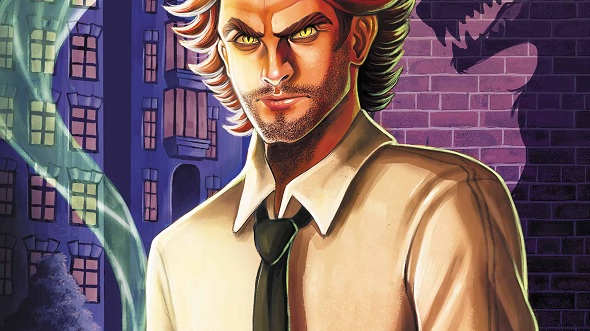 Cover image for Fables: The Wolf Among Us #1, via Vertigo Comics

So for The Wolf Among Us, for example, you could still have the socio-political themes, while injecting some absurdism into it. Imagine an episode where you play an exhausted Bigby, constantly running from street to street as he solves such ridiculous problems as ‘I was sold a defective glamour and it turned me into a cow’ and ‘The plumber we got in was a fraud, now the sink won’t stop leaking but I’m a witch and will melt in water’. It’s still a strong commentary on the suffering of an immigrant population being forced into new social housing, and the procedures involving in managing them.

The other big question is when the game will be set. Telltale have already said it won’t resolve the cliffhanger from the end of Season One. Was that just a white lie to throw us off the scent of Season Two, or will this be set many years later in order to avoid addressing the question?

Jeremy: Given that they told us not to get our hopes up just a day or two before announcing Season Two, we should probably take that with a hairy handful of salt. Besides, I am still invested in the events of those first episodes, and their uneasy resolution leaves plenty of threads Telltale could still tease open. Without spoiling anything, the fables who had been let down by their government in Season One remained desperately poor when it finished, and the gulf in their society – between those with the good fortune to be able to pass as human, and those who had to scrape together the cash to fake it via magic – was far from closed. 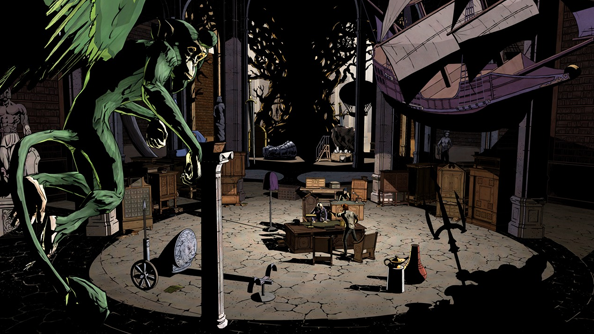 What’s more, those themes are easily as resonant today as they were in 2013, and are no better represented in the medium. When I think of games about disenfranchisement, only Oddworld springs to mind, and maybe Far Cry 5 – which Ubisoft’s Dan Hay says is partly inspired by America’s subprime mortgage crisis, if you can believe that.

The Wolf Among Us was a prequel to Fables, right? Do you think it could pick things up in a different timeline and still feel vital in that way?

Matt: Telltale have engineered brilliant time jumps before (see The Walking Dead), but they’d have to jump significantly in order to bypass the core Fables narrative, and that’d leave players pretty confused. Staying a few years ahead of the first comic issue is probably the sweet spot, plus that 1980s feel works well for the series.

I do want to see change, though. Keep our beloved characters, keep the overall themes, but scrap everything else. Exchange the neon purples and pinks for something less noir, let the cast crack the odd joke, and swap out the serial killer vibes for a tale that’s suitably awful but perhaps less grisly in tone. Like the comics, I want The Wolf Among Us to remain consistent in what it is (a detective game), but swap out the lens through which we see it. There are so many crime subgenres, Telltale just need to find the right one.

Top image:Fables: The Wolf Among Us #2,via Vertigo Comics