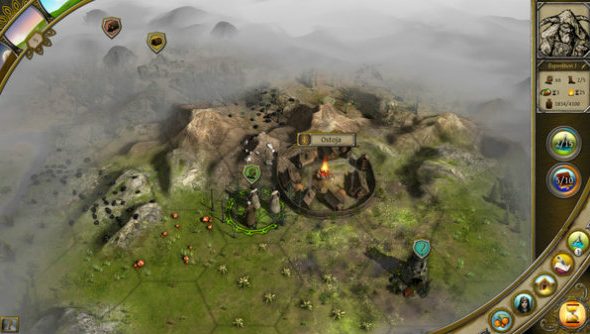 Roguelike 4x strategy mixed with tactical, card-based combat sure sounds interesting, and the fact that it comes from a studio that houses a developer who worked on Gwent only stokes that interest more. If you want to find out if it works, Thea: The Awakening has just left Early Access.

We had Geralt of Rivia review Gwent for us.

It left Early Access late last week and has been getting very postiive reviews on Steam so far. The DRM-free game is 20% off at the moment, so it might be worth grabbing if it sounds like your sort of thing.

Cards aren’t the only thing Thea: The Awakening has in common with The Witcher 3 either. The turn-based survival is based around Slavic myth, telling a post apocalyptic tale of a malevolent force that has swept through the land, bringing with it some nasty creatures, fromStrigas to Baba Yagas.

But here there are no heroes to cut the beasts down with their silver blades, there is no white-haired hunk of man muscle to ride into town and make your problems go away. It’s just a bunch of hopeless, starving survivors who are trying not to die.

You can choose to explore beyond the fog of war, or hunker down in your village, each game played feeling different thanks to the randomly generated scenarios.