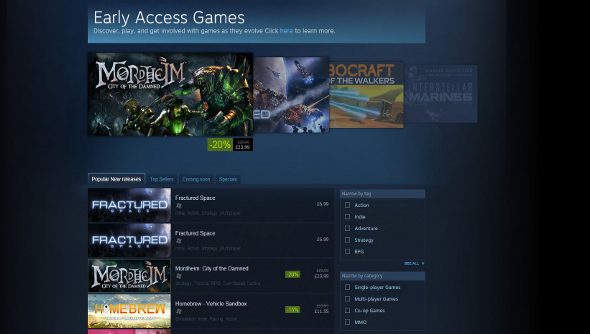 Steam’s Early Access program has been inundating the platform with in-development games for a year and a half now, and it’s become the Wild West. Games with “borrowed” assets, false advertising, forum drama, and titles that never get finished – it’s become increasingly hard to judge whether or not a game is worth investing in. It’s why we do Early Access reviews now.

Up until now, Valve’s been completely hands-off. Besides taking down games that use assets the developers have just lifted or make false claims, Valve’s presence hasn’t really been felt at all. That was until now. The sheriff’s badge has been dusted off, and a new set of rules and guidelines have appeared.

Valve starts by taking on the unenviable task of defining what an Early Access game actually is, something that many developers and customers still aren’t quite sure off.

“Steam Early Access is a way to invite customers to get involved with your game as you develop, so that you can get the feedback you need to make better informed product decisions and to ensure the best outcome for your customers and fans. When you launch a game in Steam Early Access, there is an expectation by customers that you will continue development to a point where you have what you consider a ‘finished’ game.”

Valve does acknowledge that mitigating circumstances might lead to a game not being finished, however.

“We know that nobody can predict the future, and circumstances frequently change, which may result in a game failing to reach a ‘finished’ state, or may fail to meet customer expectations in some other way. We work hard to make sure this risk is communicated clearly to customers, but we also ask that developers follow a set of rules that are intended to help inform customers and set proper expectations when purchasing your game.”

With that explanation out of the way, it’s onto the rules. These are etched in stone, at least as far as developers should be concerned, and have to be adhered to.

The first rule is about branding. From now on, Early Access devs must make it clear on any third-party sites where they sell Steam keys that the game is not finished.

Developers should also avoid making promises about the future, including release dates and additional content. That shouldn’t stop devs from listing the things that they are planning, but will stop them from saying that they will definitely happen. “Customers should be buying your game based on its current state, not on promises of a future that may or may not be realized,” says Valve.

That Steam Early Access titles need to be available on Steam should be an obvious one, but Valve also clarifies that they cannot be put up on Steam any later than they are anywhere else. Also, when they are put up for sale, they have to be reasonably priced.

“We expect Steam customers to get a price for the Early Access game no higher than they are offered on any other service or website.“

After the rules comes a list of guidelines. These are suggestions and mainly common sense, though they are worth highlighting and repeating, because quite a few Early Access developers have made these mistakes.

Do you think these new rules and guidelines will get Early Access under control?