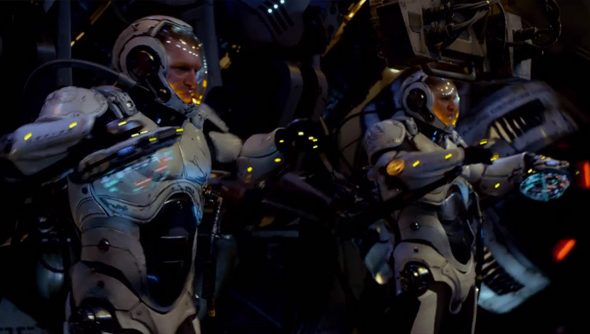 Is this the voice of GLaDOS in this trailer for Guillermo Del Toro’s upcoming Transformers-meets-Godzilla action romp Pacific Rim? Well, yes it is. Del Toro revealed earlier in the year at New York’s Comic Con that he’d employed the vocal talents of Portal’s Ellen McLain to play a military AI in his latest movie. What you might not have expected is exactly how much it sounds like our favourite digital psychopath, and how the premise of Pacific Rim revolves around a portal. This isn’t a resemblance, it’s a cameo. One that Valve’s lawyers must surely have approved of. Surely. Check out the trailer below.

Del Toro has professed his loveof Valve in the past, and of games in general. His own game, Insane, was being developed with Volition atTHQ before being unceremoniously cancelled. The rights returned to Del Toro, who after searching for a developer has recently confirmed that the title is back in production.

Until then, the man is clearly exploring his love of games vicariously through the medium of giant blockbuster releases with building-sized mechsuits and ancient inter-dimensional godbeasts. As you do.

Another uncanny reference to Portal can be heard in that trailer’s distinct, Inception-esquethwangsounds. Compare the first three seconds of the trailer with the electronic-scrapings of the beginnings of the Portal 2 OST.