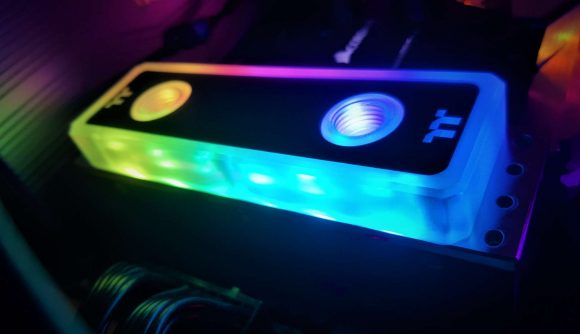 Yes, Thermaltake has officially entered the high-performance memory game for the first time. But it’s not just looking to ship your normal, everyday DDR4 memory modules, oh no, Thermaltake is using its cooling heritage to try and bring something new to the table. And that means the new WaterRam memory comes with a unique water cooling solution to ensure your DDR4 remains chilled.

And RGB. Of course. There isn’t a part of your PC, or in fact the wider world, that can’t help but be improved by the liberal use of RGB LED lighting, and the Thermaltake WaterRam waterblock is chock full of the damned things. All helping to make your rig look like a 1980’s Spielberg/Close Encounters nightmare. Wonderful.

The memory sticks themselves are relatively restrained, with a simple brushed metal aesthetic, squared-off to provide maximum contact for the heat exchanging waterblock. The WaterRam comes in two flavours, both DDR4 running at 3,200MHz, but in either 16GB or 32GB capacities. The modules support the classic XMP 2.0 overclocking profiles, with relatively low CL16 latencies, and will retail for £230 and £400 respectively for the 16GB and 32GB kits – both with the fancy RGB waterblock.

Obviously the new Thermaltake memory kits are aimed at the serious PC enthusiast, those who are happy to chop and change their custom water cooling loops in order to squeeze some high-performance memory in there. These are not the simple memory upgrade kits anyone will aiming for, but if you’re fully looped-up, have a penchant for RGB LEDs – or already have a Thermaltake kit plumbed in to chill your system down – then the new WaterRam could be the perfect accompaniment. 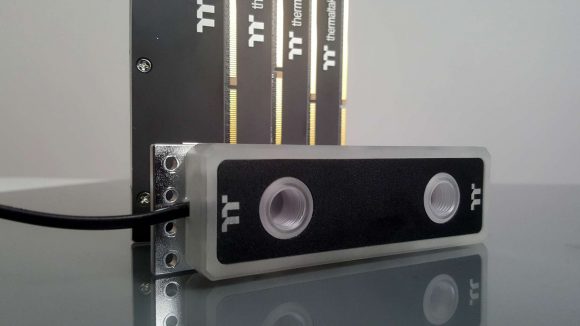 It’s rather niche, granted, and I’ll wager few of us have ever really considered cooling our RAM down. In fact the design trend in memory over the past few years has been to move away from huge heatsinks being built onto our memory modules. DDR4 is already rather efficient, and can come in low-power, high-performance variants without the need for direct cooling.

Plug it in: The best gaming motherboard to house your memory

Serial overclockers, however, might benefit from the extra cooling, though just how much difference having chilled memory modules will make to your gaming rig is tough to say.

We’ve had a quick play with Thermaltake’s new WaterRam kit, and that pulsing waterblock does have a certain garish charm about it, but in all honesty it seems rather unnecessary. At least for the majority of gamers anyways. 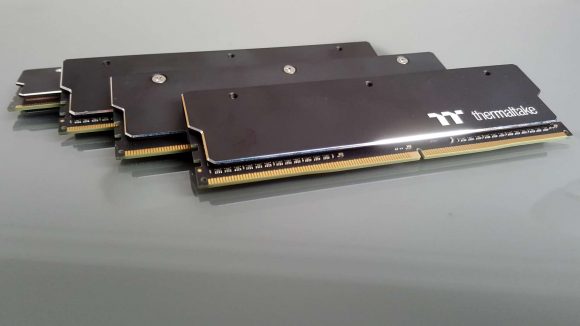 Personally speaking, I’m more of a fan of the restrained design of the memory sticks themselves. The simple, industrial look has an elegant style I much prefer to the over-the-top gaudy waterblock. If Thermaltake decides to offer the kits without the liquid cooling elements them I’m definitely interested.