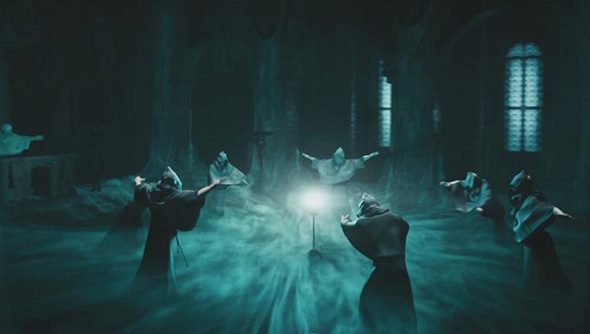 When Eidos Montreal took on the Thief series, they were left a couple of problems from beyond the grave by Ion Storm Austin. The first, a respected and respectful sequel to follow-up adequately – Deadly Shadows was no Invisible War. And second, a narrative quirk that saw Garrett hand his blackjack down to a protégé. How on Earth were the studio to reboot Thief without the original master thief on board?

The answer: they didn’t. Eidos have instead come up with a narrative quirk of their own to explain away the new burglar.

The new trailer, ‘Channeling the Primal’, was shown at US televison’s award-light award show VGX this weekend. It’s composed of all in-game visuals – though mostly of the cutscene variety.

Sorry, medieval Batman. No early retirement for you.

The foolhardy master-thief-in-waiting who fell in the pot of magic broth just now was Erin, and won’t be troubling the protagonist’s seat any longer. Instead, it seems she’ll be prompting guilty handwringing on Garrett’s part, and providing plenty of ‘grr, I’ll get you’ motivation over the course of Thief’s plot.

The Primal, the strange force harnessed by the robed lot above, will grow to change the shape of The City (though if you check the maps of the first three games, you’ll find nobody was quite sure what shape it was to begin with).

The suggestion here is that the Primal has physically and psychologically changed some of The City’s residents – and not to make them more neighbourly. Between the zombies, the fish-people and The Metal Age’s alternate-dimension monkeys, Thief has never been afraid to dabble in the supernatural, so nothing’s changed there.

I’m more worried about the general murkiness of those cinematics, though I think I’m fonder of the proper Thief footage seen to date than most. What’s your feeling on Thief at the moment?