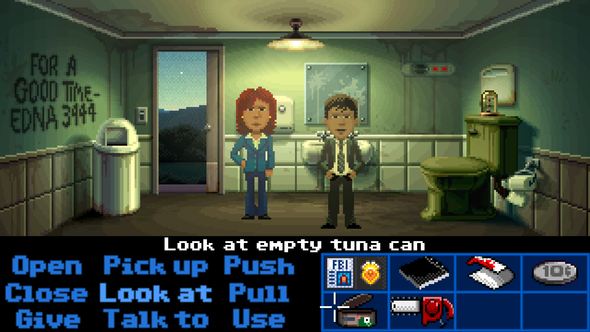 When Ron Gilbert, godfather of point-and-click adventures, announced that he was making another adventure game in the style of his late ‘80s classics like Maniac Mansion and The Secret of Monkey Island, fans of the genre practically emptied their collective bank accounts. The game raised $626,250 in just a month, almost doubling its goal. Since then, Ron and the team have been releasing regular updates on the project, including this latest clown-tastic effort.

Hungry for more nostalgic fun? Check out our list of the best old PC games.

Mixing the supernatural and the super-silly in a way that only Ron Gilbert can achieve, Thimbleweed Park follows a cursed Clown, a ghost, two secret agents and a recently bereaved young woman on a tour of the eerie town from which the game takes its name. A murder has recently occurred, but that’s the least of your worries in Thimbleweed Park.

The gameplay is typically old-school, with more than a few nods to the aforementioned Maniac Mansion. The game’s host of protagonists can be switched between at will and interaction with the World is done through a series of verbs such as ‘pick up’, ‘use’ and ‘talk to’.

Thimbleweed Park will be landing on your PC early this year. But you can learn more right now by checking out their official website.