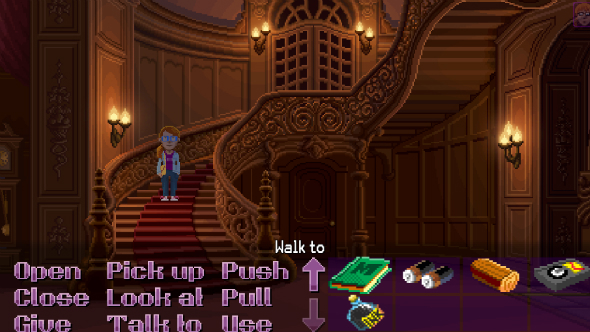 Adventure games have seen a huge resurgence in recent years, and with LucasArts pedigree like Ron Gilbert and Gary Winnick behind it, Thimbleweed Parks has a lot of anticipation resting on its 8-bit shoulders. Thimbleweed Park’s newest trailer introduces us to Delores, one of the game’s five playable characters, who has recently been given her uncle’s once world-famous pillow factory.

Long for more from the pixelated era? Check out the best old PC games.

The game’s Kickstarter was launched almost two years ago, and is looking in good shape ahead of its 2017 release window. Boasting some seriously old-school graphics, even by modern pixel-art standards, Thimbleweed Park is an adventure game all about uncovering the story of its titular settlement. With this new Delores trailer we learn that the town was once a social hub for the rich and famous, thanks to Delores’ capitalist uncle, who built the town’s world famous pillow factory. Business for the pillow factory went downhill and with it so did the fortunes of Thimbleweed Park.

Channeling plenty of stylistic cues from the Commodore 64’s Maniac Mansion, Thimbleweed Park looks to be heavy on story, intrigue and dark humour. The game’s other playable characters include a cursed ghost, two federal agents and the ghost of a pillow salesman – so it’s fair to say the game will be LucasArts through and through.