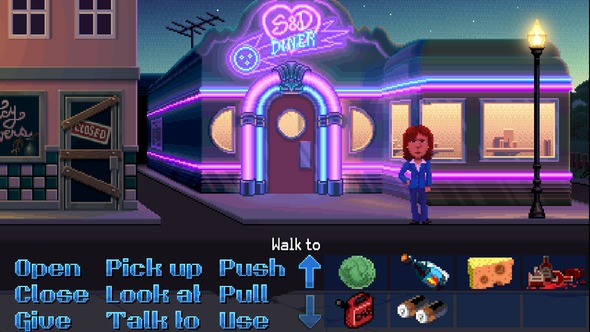 There’s the HUD, inviting you to pick things up, open them, use them, combine them. And there’s the pixel-perfect environmental artwork, pulling you into the game world more than an ostensibly low-fi collection of dots has any business doing. Scroll to the left or right and you’ll find bombastic denizens of a larger-than-life community, all aching for a chat. That’s Thimbleweed Park – classic adventure gaming as you fondly remember it, and with the less desirable elements of the reality as it was in 1987 filtered out.

Looking for the real oldies? These classic PC games will scratch your itch.

It wasn’t just the load times, the weird trackball mice, or that lingering paranoia that something might happen to the floppy disk you kept saves on. Though Thimbleweed Park is instantly recognisable as the offspring of the classic Lucasarts adventures of yore, it happily embraces the subsequent thirty years of technical advancements and hides them under its bonnet. What you play is infinitely more user-friendly than Maniac Mansion and Day of the Tentacle, in ways that wouldn’t be evident unless you went back and played those games in situ.

Ron Gilbert and Gary Winnick, themselves veterans of the ‘80s development scene and seminal figures in graphic adventures, are back to tell a new tale, set in the old days (1987 specifically), in the old ways. Thimbleweed Park is a town past its heyday, home to an eccentric community whose population just decresed by one. It’s that cadaver, face down under a bridge, that brings agents Ray and Reyes to town, and that’s where you and your left mouse button come in. 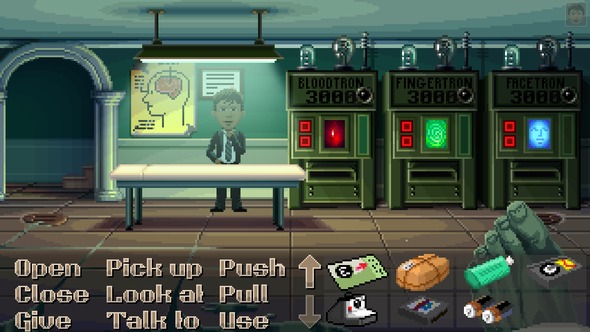 Ray and Reyes are swappable at any time, along with several other characters you’re introduced to and given control of as the game progresses. Narratively that means you learn about the town from both an outsider’s and an insider’s perspective; mechanically it opens the door to more involved puzzling. That’s demonstrated neatly in a rudimentary early game puzzle that tasks you with photographing the cadaver for your case. Each player-character’s inventory is available to the other via that time-honoured ‘give’ command, so it’s worth keeping an eye on who’s carrying what.

On paper, it might also make puzzles that bit more daunting to the easily perturbed, since so many more variables are introduced, but Gilbert assures me that being able to switch characters actually avoids the player getting stuck. If you hit a wall with Ray, you can always progress in a different direction with Reyes or another cast member for a while. You may even accidentally further someone else’s cause.

Difficulty is an area Gilbert, Winnick and their team have obviously spent some time thinking about. Gamers in 2017 have different expectations – and attention spans – than their 1987 counterparts, so there’s a balance to be found when summoning some of the old magic for a new, or at least older and smartphone-addicted, audience. To that end there’s the option to play in normal or casual mode, the differences coming in puzzle complexity and frequency. It’s also an incentive to replay the game after the first playthrough on casual, if you didn’t back yourself to slay the puzzles initially. 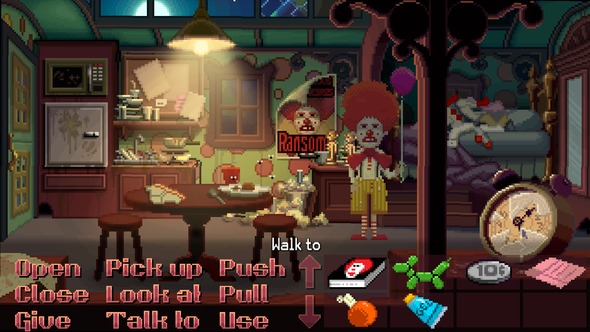 My experiences of the early-game puzzles were logical and enjoyable, though I suspect there’s much of the Machiavellian LucasArts brain-teasing to come later on. In roughly an hour spent in Thimbleweed Park I didn’t have to resort to the old ‘combine everything with everything’ fallback. Which was a relief, given that Ron Gilbert was sitting right next to me. What I did do, though, was laugh a lot. I don’t remember the last time I belly-laughed at a game for reasons other than hilarious glitch/clipping problems, but such is the easy way of Thimbleweed Park’s dialogue. The Pigeon Brothers, two girls in bird costumes who become increasingly fixated with ‘strong signals’ as you speak to them more, were the first to summon a giggle.

The bizarrely upbeat vacuum tube store till girl was the next. Then the convenience store employee who had late ‘80s California surfer/stoner culture flowing through his veins. And pretty much everyone else, come to think of it. And that’s what will bring me back to Thimbleweed Park at release: the characters. The same hook that’s always worked for me in adventure games, even though I’ve never had the kind of mind that can unpick the logic puzzles and item combinations without doing a little cry. Thimbleweed Park’s got the level of characterisation you only really get when genre-defining industry vets get together. 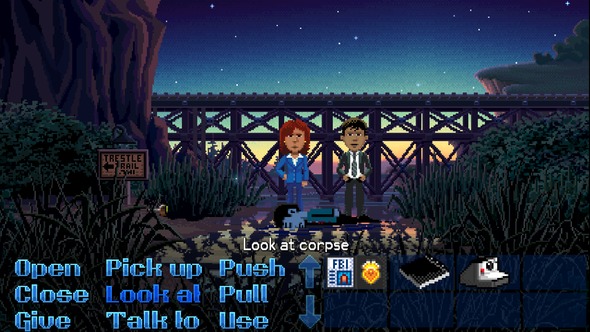 There’s another layer of characterisation to each scene, though: that of the self-referential. Early on I spot a single white pixel lying on the road and pick it up. There it sits in my inventory, a dust spec that suggests a game-wide trawl for its fellows in the name of tongue-in-cheek pixel-crawling puzzles for the older fans. Similarly, Company names like Mucus Flemm come up, along with fourth wall-breaking dialogue in which Ray might ask whether she should save her game, initiating a lengthy exchange with one of the Pigeon Brothers about the merits of forgiving adventure game design.

The cumulative effect of all that on me was an overwhelming charm. Quite what someone who hadn’t played Day of the Tentacle, or even The Cave, before would make of it all is anyone’s guess. But when Thimbleweed Park releases – “soon” according to Gilbert – the genre veterans will have to work really hard to find something to grumble about here.