For diehard Witcher fans, Thronebreaker: The Witcher Tales offers a look at the Continent from a new perspective – a unique, complex story arranged with the same narrative excellence that originally drew so many people to the fantasy trilogy. If you’re a Gwent Grandmaster, there’s a fleshed out single-player experience and plenty of room for experimentation with new cards and a variety of twists on the formula. But if you enjoyed Geralt’s adventures without necessarily falling into either of those two camps, CD Projekt Red’s latest adventure is a bit of a hard sell.

Thronebreaker is an RPG built around an adapted version of The Witcher 3’s in-game card game, Gwent. It focuses on Meve, the warrior queen of the twin realms of Lyria and the somewhat more famous Rivia. Set a few years before the events of the Witcher trilogy, the game opens as Meve returns from a peace summit to find that her realm’s appointed caretakers have let things slip. As she arrives in the first of the game’s five maps, Lyria, Meve and her army are met by collections of ghouls and bandits. But a few monsters and an ambitious band of ne’er-do-wells soon prove to be the least of her worries.

Meve navigates her realm via an isometric overworld. This can be used to simply travel from one encounter to another, but you soon learn that exploration is important as you can come across the supplies your army needs to maintain its full strength. While in the overworld, you’ll search for supplies, find treasure, settle disputes, and explore your kingdom. It’s a scaled-down version of what we’ve come to expect from the Witcher games, but Lyria is colourful and detailed, with the same sense of rural hustle and bustle that The Witcher 3 captured so effectively. Later on, new maps will take the story to other unexplored regions – Mahakam, Rivia, Angren, and Aedirn.

The main event, however, isn’t the world, but the battles. As Meve moves through her realms and into others, she’ll come upon plenty of antagonists. Geralt would take them on with magic signs and swords, but in Thronebreaker you’re not a lone Witcher, you’re a general managing an army. As a result, your disagreements are resolved through games of Gwent, which represent full-scale battles between opposing forces. 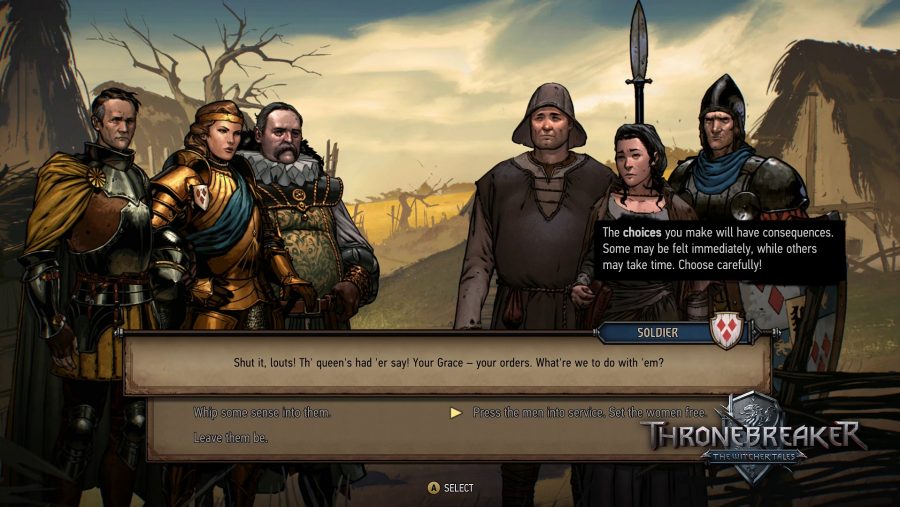 However, Thronebreaker features two different ways to solve a conflict. Most recognisable are the full matches – best-of-three scenarios in which rounds are won by the player with the most points. These bear some resemblance to both the original version of the card game from The Witcher 3 and its standalone multiplayer version.

it offers both a new take on the traditional format, and a host of new ways to play

More common throughout the world, however, are puzzles. These are shorter matches, that take place across just one round, with very specific win conditions. One puzzle required me to eliminate all of the enemy’s cards, while another tasked me with saving the army from a rockslide. In these situations, winning or losing the round in the traditional sense (by having the most points) is irrelevant – completing the win condition is all that matters. Some of these puzzles are, as a result, much more enjoyable than others. One asked me to whittle a group of monsters down to exactly one health each using a fixed selection of cards. It was an interesting twist, but felt needlessly obtuse, requiring more precise mathematics than I was willing to put in during my preview. The approaches are out there, but encouraging players to whip out a notepad and calculator for optional challenges could breed frustration.

My larger concern, though, is that CD Projekt is trying to capture too wide an audience with Thronebreaker. There’s a nuanced and well-established RPG in there – many members of the Witcher 3 team worked on the game, and their narratives were reportedly designed using the same method. As a result, there’s a 30-hour branching narrative with more than 20 potential endings, exploring an underutilised corner of The Continent. It’s a look into lore that helps contextualise the events of The Witcher 3, focusing on the second war with Nilfgaard. My preview introduced a handful of lively characters brought to life with a cartoonish art style and impressive voice acting. But it’s not the Witcher fans I’m worried for, it’s the Gwent players.

Gwent is already one of the best card games on PC but it's got a lot of competition. It sits among the likes of Hearthstone, Faeria, and The Elder Scrolls: Legends, but the biggest threat is yet to come - Artifact, the Dota 2 card game. Will Thronebreaker's introduction of a well-written RPG fastened to the engaging card battles be enough to keep up?

If your only experience of Gwent stems from its format in The Witcher 3, you’ll find there’s quite a lot to learn, as Thronebreaker is based on the multiplayer version of the game. But even if that’s what you’re more familiar with, you’ll find a pretty massive gap in your knowledge, as Thronebreaker is built around the game’s unreleased Homecoming update, which rebalances cards, reconsiders the presence of leaders, and strips an entire row from the board.

It’s still recognisably Gwent, but the update takes a while to adjust to, and Thronebreaker throws plenty more change into the mix too. You won’t be using your Gwent decks, either, as there are 250 new cards balanced specifically for single-player. Puzzles add new mechanics and rulesets while removing the capacity for others. Add to that overworld exploration, RPG elements, and even base-building, and it’s not surprising that this is billed as a Witcher story rather than a Gwent expansion. 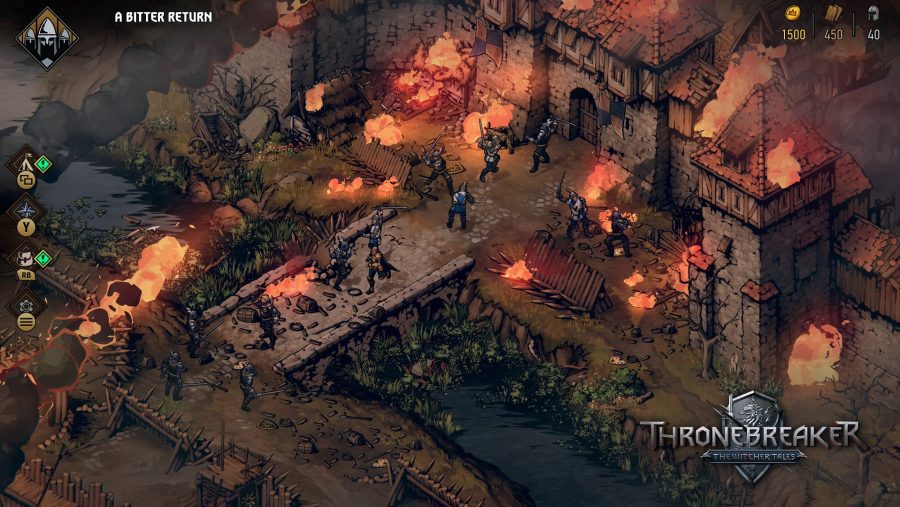 There is, however, plenty to like if you’re invested in the card game itself. Meve is a confident and experienced ruler, which means Thronebreaker is more about outright attack than either single-player or multiplayer Gwent. As a result, your battles with the AI need you to wring the most efficient approach out of your cards, rather than worry about what your opponent might try and pull. Enemies aren’t as devious as human players can be, but they also had plenty of new tricks up their sleeves, and were effective at dismantling some of the more potent strategies that the starting deck encouraged me to build on. Across puzzles and battles, Thronebreaker offers both a new take on the traditional format, and a host of new ways to play.

If you’re a standalone Gwent fan, you’ll find Thronebreaker offers plenty of variants on what’s always been an entertaining theme. If you played hours of The Witcher 3 but never so much as laid eyes on your Gwent deck, there’s the potential for another rich and emotive story that touches on the trilogy’s central themes. But I’m worried that while Thronebreaker offers a potential jumping-off point for a host of interesting and varied Witcher games, the current approach relies too heavily on the passion of two different fringes of the franchise’s wider community.