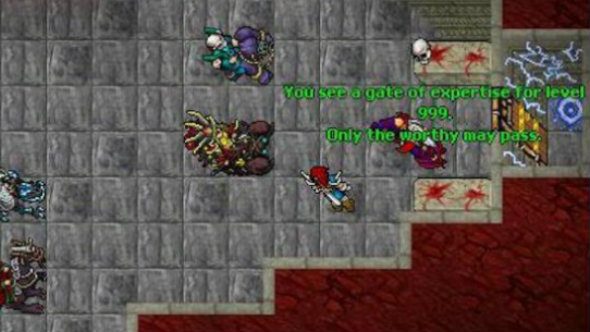 For 19 years players have been trying to open a locked door in Tibia, a hardcore MMO created by four German computer-science students, but one player just managed it after nine years of solid grinding. Once they appeared back through the other side, they logged off. Nobody has heard from them since.

We have a list of the best MMOs on PC, but this is the first time I’ve heard of Tibia.

The door in question is locked for anyone but a player who has reached level 999 – a feat that the developers thought was impossible initially. You see, Tibia is hard. In fact, when you die, you can lose days of progress. It also takes kind of a while to level up.

It’s estimated that it took the player who entered the door,Kharsek, nine hours to go from level 998 to 999, and that’s with a full team of healers keeping him topped up.

Whereas many might have walked through the door during a livestream and shared it with the world, Kharsek, for whatever reason, decided to keep it to himself, and the developers aren’t sharing. It looks like the community will have to wait for one of the three other players who are above level 900 to reveal its secrets. Maybe Molyneux is in there.

You should read the full story at Vice, because it’s fascinating.