If there’s one thing we can all agree on, it’s that Star Wars is Very Important, and the games are the Most Important. That’s why I was so tickled by this old-school anime-style fan video that’s been making the rounds on Twitter. Not only is it a tremendous piece of fan animation, but it’s also an ode to the greatest thing Star Wars ever gave PC gaming: TIE Fighter.

I’ll be the first to admit that the connection to PC gaming is a bit tenuous here, but I just don’t care. TIE Fighter is my turf and we are going to sit down and watch this video together and be amazed. It’s done in the style of 1980’s anime films, with their obsessive attention to environmental detail and tremendous vistas. A short, teaser version of this film surfaced a few years ago, but this is the final product and damn if I wouldn’t kill a few Jedi for something like this to exist as a miniseries.

Pretty cool, huh? Huge props to animator Paul Johnson for pulling this off.

So now let’s talk about why this is bullshit.

First, while the Empire did have cool-looking equipment and a slick, glossy approach to industrial design, their fighters never could have achieved the kind of kill ratios we see in this video. In fact, from the moment the battle begins, shielded Rebel fighters are blowing up like aftermarket droids from a Jawa sandcrawler. That’s… that’s just preposterous!

Speaking of preposterous, what unknown super-power did that Imperial Interdictor Cruiser use to deflect that cloud of rebel missiles? I don’t remember that from any of the innumerable escort missions I flew to protect those flimsy pieces of trash! Come on, it wasn’t enough to put three Imperial Star Destroyers up against a Rebel Frigate and some Corvettes? You had to give an Interdictor Cruiser wizard powers?

There is a point where a single TIE Bomber fires a salvo of missiles that kill like eight Rebel fighters at once. That might have seemed like another lapse in historical accuracy, but real fans know the Advanced Concussion Missile pretty much did exactly that. 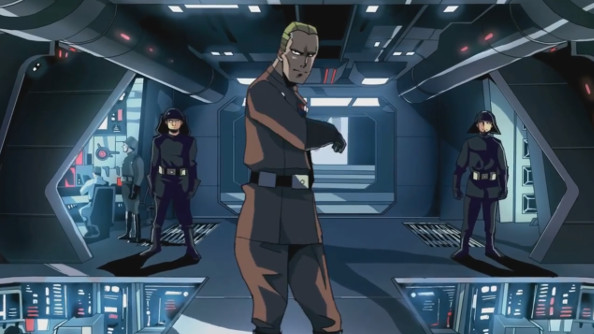 This isn’t really an historical inaccuracy, but I think we can all agree that Star Destroyer captain is a real prick, right? Can you imagine working for that guy? You’re just trying to target your turbolaser batteries and that guy is up there one the bridge strutting around like he’s summoning laser fire with a Nintendo Power Glove. Ugh, you’d never catch Captain Pellaeon pulling that crap. Daala, sure. But not Pellaeon.