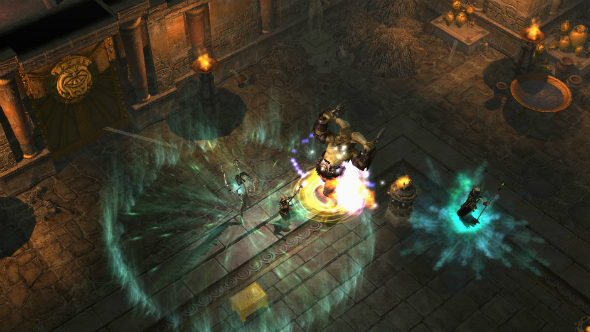 Free things for some, almost free things for all others. It’s a winning formula that’s been put forward by the shiny new THQ Nordic, who have secretly released a remastered Anniversary Edition of 2006 hack and slasher Titan Quest. The best bit is that if you’re among the one million people who own either Titan Quest, Titan Quest: Immortal Throne or Titan Quest Gold on Steam then you’ll receive the Anniversary Edition for free. If you don’t, then for the next week you’ll be able to buy it with a lovely 75% discount.

Love free things? Check out our list of the best free PC games.

THQ Nordic claim the remastered version includes 1,261 changes made since the game launched ten years ago – to see an incredibly lengthy translation of that number, here’s the full changelog, which is a riveting read. The most important change though, is the addition of Steam Achievements and Steam Trading Cards. Obviously.

The decision to give the game away was explained in THQ Nordic’s press release for the game. “Before someone comes around asking why we give our games out for free (or almost for free if you want), here’s a quick explanation: After our name change from “Nordic Games” to “THQ Nordic”, we wanted a running start for our new identity and had to think about how to begin the new era with the most positive connotation possible (for a publisher).”

Lovely stuff. So for the lucky one million, the remastered version should be in your Steam Library very soon. The other seven billion of you will just have to do with the discount.