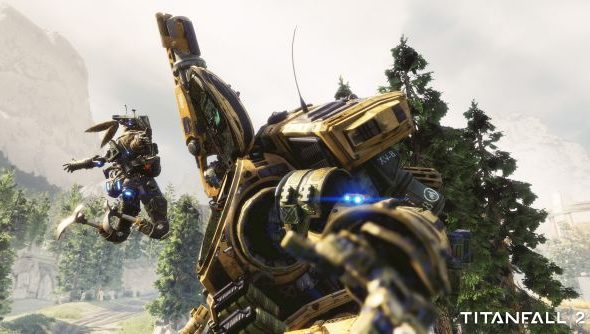 Titanfall, the colossal online shooter from 2014 with even more colossal expectations surrounding it, deserved better than it got. It was meant to be the next step in the evolution of the genre – a glorious fusion of gundam-style robots with free-running, jetpacking soldiers scurrying around the battlefield in to take them down, or take control of them for their own team.

Want to know more about Titanfall 2? Here’s our rundown on the release date and more.

And on a technical level Titanfall delivered. It was fresh, fluid and a welcome deviation from the CoD/Battlefield hegemony. However, a misguided marketing campaign by EA that all but ignored PC gamers, combined with the brainwashing dominance of the aforementioned shooters, condemned it to not become the formidable force it should’ve been.

But many great franchises were borne of sequels that realised the potential of their predecessor, and my hands-on with Titanfall 2 has left me feeling quietly optimistic that this could be such a sequel.

Never has the term ‘jumping into a game’ felt as fitting as when I did so with Titanfall 2. The game is all about mobility, with a single tap of a button, I’m gliding towards the nearest rooftop thanks to the newly included grappling hooked. It’s not only an extremely fun tool (as anyone who’s played Just Cause 3 can attest), but also vital to slightly balancing out the inevitable power disparity between Titans and ground-based pilots. When trying to mount an enemy Titan or your own, you can now reel yourself onto it from a hundred feet away, making you a far greater threat than your diminuitive stature would suggest.

The map I’m playing on is ‘classic Titanfall’ – a stern factory district of washed-out metal buildings that perhaps suffers a little bit from ‘generic futuristic setting’ syndrome. It’s not eye candy by any means, but I quickly forget about that as I begin weaving between the legs of giant mechs while taking out the AI grunts surrounding them. 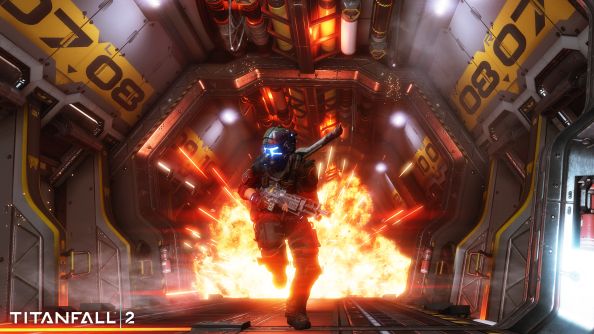 I’m playing the Variety Pack mode, which mixes up several other modes that entail you taking out specific, super-powered Titans, a certain number of enemies within a given area, or capturing control points. This mash-up feels like the best way to play a game in which you can traverse the maps with ease and grace as a parkouring pilot. Much like its predecessor, the game feels generous to the inexperienced FPS player. With only six players per side, much of your combat will be against the cannon fodder Grunts and marginally tougher Spectre troops, allowing you to rack up points without necessarily having to be a prolific player-killer.

Not that I’m content to mow down the hapless AI, and the first enemy Titan I encounter I don’t hesitate in deciding that the big bastard is going down. With help from the trusty new grappling hook, I mount him and chuck a grenade into his hatch, causing a fair – if not exactly devastating – bit of damage. He doesn’t take kindly to my actions, and the next thing I know I’m desperately, though effectively, leaping across rooftops and zipping around like the hero in some kind of futuristic take on Crouching Tiger, Hidden Dragon. Thankfully, a teammate Titan comes to my aid and I manage to get away, feeding on grunts and gunning down a pilot to earn enough points to call in my very own Titan.

Just as in the original, it’s majestic moment getting into a Titan, and that sudden shift of scale and gameplay dynamics upon getting into one is the game’s true USP. Where before I was gallivanting around like a cyborg ninja, now I’m charging headlong into other machines, pounding into them with heavy weaponry while strategically using my shield to block enemy shots, and even capture their projectiles to throw right back in their faces.

It’s all about angles and timing when you’re a Titan, and for the most part they feel and play just like before. Getting behind a building, charging up a power shot, then jumping out around the other side to shoot it in the back of the head is a classic manoeuver, and winning a colossal duel against an enemy Titan is more satisfying than ever thanks to the satisfying and more refined explosion visuals.

I didn’t get much time with Titanfall 2, but (much like its predecessor), it has the potential to force its way into being a major player on the online shooter scene. It combines the formula so tried and tested by the likes of Battlefield with the fluid, empowering gameplay we now associate with newcomers like Overwatch and Battleborn.

The few changes I got to experience in my hands-on were very much welcome, but really this is a refinement of the excellent gameplay set in motion by the original. Now, it’s up to EA and, of course, gamers willing to try something different, to make sure that Titanfall 2 gets the prominence that I’m confident it’ll fully deserve.