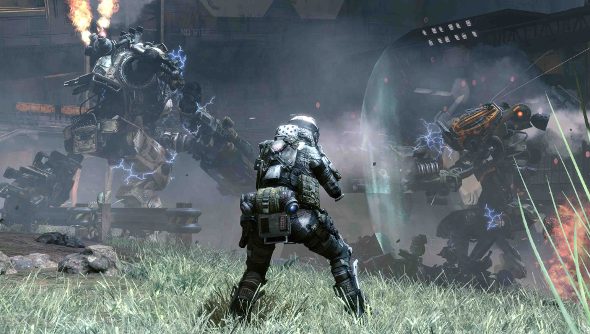 Update August 12, 2016: The Titanfall 2 single-player rumours were true and we’ve got the footage. You can see it above.

Turns out the rumblings of how the Titanfall 2 single-player campaign will work are true, and you can see the proof above.

See what else is stomping over the horizon in our list of upcoming PC games.

This footage came out of an influencer event last week, where various FPS-focused YouTubers and fansites got to see more of the game. It’s also one of EA’s big games for this Gamescom, so expect to see it there.

Original story August 11, 2016:Details have leaked for Titanfall 2’s single-player campaign, revealing more about the relationship between man and machine. The first game’s single-player was kind of an afterthought, but this time around it’s a fully fleshed-out story about a guy and his dog (giant robot).

American games site Destructoid accidentally pressed publish on a preview of Titanfall 2 slightly early, so we’ve picked out some of the notable new details, since we didn’t attend a preview event.

You play Titanfall 2’s single-player asJack Cooper, a rifleman with a very videogame name. He’s a footsoldier with aspirations of becoming a mech pilot. Early on, his dreams are answered when the death of a higher-up puts him in the pilot’s seat of a Titan.

Your Titan is called BT and you talk to it. BT, it’s good to talk.

At the start, BT is more of a landline than a mobile, as he’s damaged and can’t move. Once you link up via comms you can get chatty – like a phone – as you fight around these semi-open landscapes on foot, using a cloaking device and wall running to get the drop on enemies.

There are also dialogue options, though these seem to exist to add a bit more flavour and personality to the exchanges, letting you choose between a dry or witty response.

From the preview, the on-foot stuff is similar to Crysis, but then you’re massively empowered in your mech. Sounds like it could make for some nice pacing, if spaced out right.

Either way, one of the writer’s favourite things about the game was its witty conversations between the protagonist and a robot, so that’s unexpected.