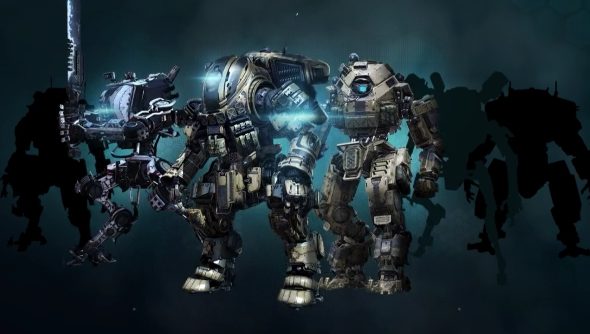 A new trailer just dropped for Titanfall 2, showing off the robots and all their varied abilities – raining rockets, swinging swords and firing ion cannons across its futuristic battlescapes.

This year will be a good year for shooters. See what else will be good in our list of upcoming PC games.

Titanfall 2 is going full hero shooter, so each will be good for specific things. Mainly killing people, but in different ways, but mostly with guns. Either way, people are going to get dead.

There’s Legion, presumably called so because its bullets – fired from a massive chaingun – are many. Pilots are turned to mush almost instantly by his barrage.

Then there’s Ronin, who, well, uses a sword, obviously. The thing also has a shotgun, so it’s your close range go-to. Ronin’s mate (probably), Northstar, is basically Overwatch’s Pharah, raining justice (rockets) from above.

Meanwhile, Ion fires an ion cannon, because of course it does. And next there’s Snipey McSnipeFace, who snipes people. In the face.

Okay, I made that last one up.

The next one is actually called Scorch and it can scorch you because it uses fire-based attacks. Do you get it? I know it’s subtle.

The last one is called Tone, because they ran out of ideas.