The best bit of Titanfall is losing.

The game doesn’t just end, you see. Instead, you have to flee to an evac point in the corner of the map without getting killed by the winners. Your team get bonus experience for every member that makes it to safety, and the opposition get experience for every one of you they can kill.

What makes it so good is that every player has a jetpack-powered double jump and can wallrun. When the game ends your whole team turns around and begins leaping into the air, looking to get out of the fight they were eager to dive into a moment before. Players are springing through windows, running along walls, and generally making like Mirror’s Edge. It’s a wicked sight to behold.

But there’s so much else to love about Titanfall.

Titanfall sits at a lovely midpoint between Call of Duty and Battlefield 2142. It has the speed and twitch gunplay of the former and the stonking great mechs of the latter. It’s much more than CoD with robots, though. The levels are much larger than what we’re used to in Activision’s shooters. Wider, yes, but it’s the vertical space that makes the real difference. With the infantry’s ability to double jump and mount any ledge, I could scale every building I tried. Once on the roof you have a great view of the streets below and the other buildings about you.

You essentially have battles playing out on every level of the map.

The ground war is the most explosive and frenetic. It has teams of AI-controlled soldiers mounting house-to-house assaults, players in titans shooting rockets and miniguns at each other (largely missing and hitting everything made of meat that stands between the two machines), and player-controlled infantry who don’t know better. 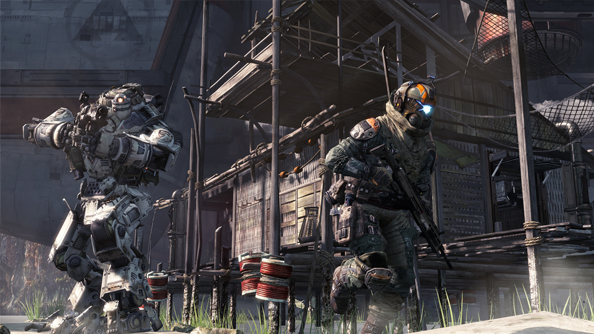 The action on the floors above ground level is like a Bourne movie chase scene. Most of the buildings can be entered in some fashion, either by staircase, open window, or blown out wall. Importantly, you can obviously leave by the same method, too. Players chase each other through buildings, leaping through exits and dropping down a floor or jumping up one with ease.

On the roofs a third style of fight is taking place. Heavy weapons troops scale the buildings to nail the ground bound-titans below and anti-infantry players bounce from roof to roof trying to take out the heavies before they can lock a rocket on the titans.

I love that infantry can use their jetpack to wallrun. I love, too, that you gain momentum as you do it. The level I played had routes shot through it that meant you could wallrun all about the place without once touching the ground. It’s a return of the bounce movement of Quake multiplayer. Within days of Titanfall releasing we’ll see players who are able to drop into battles all over the map. Like ninjas with jetpacks. 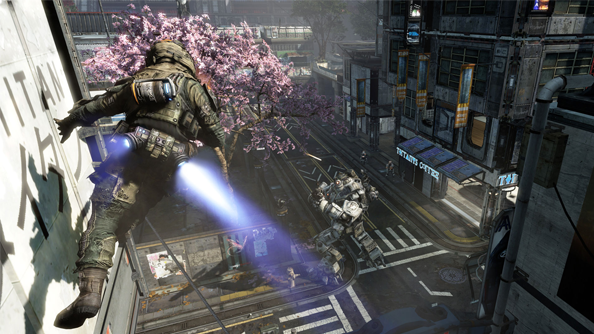 Where Titanfall falls down is the titans.After the freedom of running about as infantry it’s almost a shame to jump into a titan. The machines are completely locked to ground level. They can’t jump, climb, or run. They do have a nippy boost for dodging but it’s not something that can be used to transport you about the map at speed. You can take some solace in the fact you have a minigun strapped to your arm and a swarm missile launcher mounted on your shoulder.

When you get into a titan you become a simple bullet sponge. Every time you turn onto a new street your options break down as such: a) there are enemy infantry and no mechs: you kill the infantry b) there is an enemy mech: you try to kill the mech, possibly succeeding c) there are two enemy mechs: you walk backwards and hope they’ve not seen you.

It’s not like in Mechwarrior where you can overcome a better armoured, better armed mech by simply outmaneuvering them. The titans do have special abilities like being able to lay down a smoke screen or catch the enemies’ ordnance and fling it back at them but none of this seemed to make a great deal of difference in titan on titan combat. It’s just shoot till one of you falls over.

Despite the failings of the titans, Titanfall is an excellent game. It scales up the combat of Call of Duty and adds in the truly silly fun of having a jetpack. I’ve only had the chance to play two short games of Respawn’s shooter but it’s bumped both Call of Duty: Ghosts and Battlefield 4 in my anticipation charts.