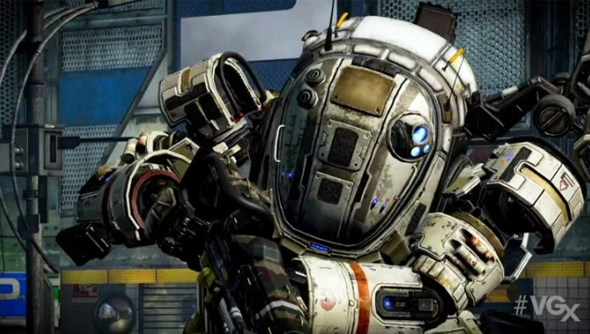 If the new Titanfall trailers are to be believed then the mechs of the future will come in all shapes and sizes, appealing to the lover of the large as much as the fancier of the thin.

The Ogre is a heavy duty bulbous thing. It’s built to soak up damage on behalf of allies and because of its larger size it can carry more powerful weapons. The Stryder, by contrast, is a lithe frame that empowers the pilot with speed and agility. It sacrifices armour but should act well as a scout or support unit.

You need to see them in motion to appreciate their strengths.

First up, let’s look at that chunky Ogre.

I’ve never been a big fan of slow mechs, I always seem to lose the advantage of the higher health simply by token of not being able to get out of the firing line as quickly as you can in a speedier mech. Yet the Ogre looks built not just to tank your way through a level but to act as a walking wall for your team. You provide cover for infantry and a distraction for enemy titans.

The Stryder is much more my sort of thing. It can skate about with its jump jets, allowing you to duck into alleyways and escape the heavier mechs. Plus, any titan that lets you literally run circles around the enemy is a winner in my book. Nothing like the combination of a speedy mech with a visibly fragile frame to annoy players that have opted for heavy armour.

I’ve had only a short play of Titanfall but it was excellent fun. If you’ve been less than enthusiastic about Battlefield 4 and Call of Duty: Ghosts then I’d start looking forward to March. Titanfall’s of the same cut as those other shooters but its mechs and freedom of movement bring a freshness that the other two have lost with successive iterations.