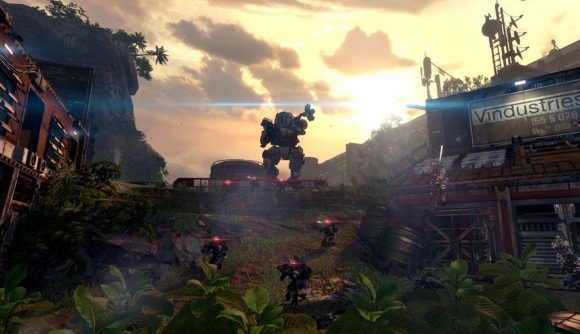 The Titanfall games are together on Steam, at last. The first Titanfall is now available on Valve’s store, and you can pick up the FPS game with its sequel Titanfall 2, at a reduced price while you’re there.

Released in 2014, Titanfall was the first game from developer Respawn, and it reviewed well at launch. The robot game used something of a live-service model, including only online multiplayer modes that had NPCs and cutscenes and other common single-player elements. It’s essentially a mech-based arena shooter, placing you against 11 other players on a map, all of you waiting for the chance to call in your robotic companion of choice as you blast and walljump your way around the buildings.

No formal sales figures have been released, but it at least did well enough for 2016’s Titanfall 2, a genuine classic of the last generation that included a great emphasis on single-player, the time-bending campaign nigh universally praised. Titanfall was already available on Windows through EA Origin, and you can access it through an EA Play subscription, too. The player feedback is already at “mostly negative” due to server issues, many finding they can’t get in, or once they do they’re kicked soon after. Some are having problems with the audio, too. A fix for the audio, at least, can be found here.

Respawn has expanded the series since then to include Apex Legends, a battle royale game set in the same universe. Apex Legends recently made the leap over to Steam too, bringing in a rake load of players, and publisher EA reckons that’ll be a billion dollar property by the end of the fiscal year.

The Titanfall Deluxe Edition is 60% through to November 25. You can find Titanfall on Steam here, and you can get the Titanfall double-pack discount here.