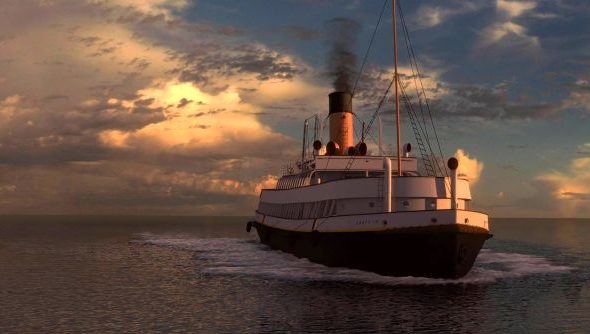 Tom Lynskey has been rebuilding the Titanic since toddlerhood. His dad had a glass model of the vessel that was smashed before he was born. But when dad built models, as he was given to do, he would hand the broken remnants of the Titanic to his son.

At the age of three, Lynskey spent a lot of time handling the decks and funnels of the great ship, working out how they fit together.

“It was a real choking hazard,” laughed Lynskey. Perhaps that’s where the fixation began. Today, he and his team are reconstructing every inch of the ship – and filling it with passengers, mystery, and the unpredictable horror of the water.

“For the lead team members, in all three of our cases it started early,” said Lynskey of his interest in the Titanic. “And I don’t think we know exactly what it was.”

Lynskey, Kyle Hudak and Matt DeWinkeleer have set out to build a definitive, digital archive. Not only will the ship’s layout be authentically recreated, but its real crew and passengers will wander the halls and ballrooms. Where possible, NPC locations will match the records – and the most significant characters will be modelled exactly to their likeness based on photographs.

It’s no easy task where level design is concerned. This is a ship that, notoriously, couldn’t be captured on the page; the plans gave even James Cameron trouble, because they didn’t match up with the wreck. 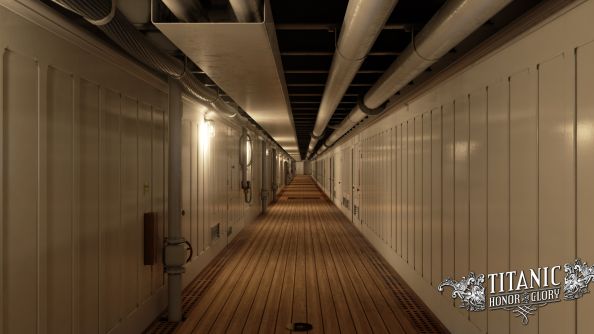 “If you’re a history nerd you’re going to love this,” he went on. “But the goal is that hopefully everyone will love this, even people who don’t care about history.”

Though they’re keen on period accuracy, the team are determined not to lose sight of the fact that Honor and Glory is a game, not an exhibit.

Players will first navigate the dock city of Southampton, and then live through the five days leading up to the Titanic’s climactic crash – getting up in the morning, choosing their clothes, and setting out into the ship to gather information. Protagonist Robert Morgan is battling to clear his name, and must follow leads while evading the police.

“Most of the clues are found by gathering evidence, and to find that evidence you need to track it down by talking to people,” Lynskey explained.

Some information will be hidden away in locked cabins, or buried in the passenger list. To reach it, the player will need to access areas under false pretences – and expect the odd chase sequence or fight when the bluffwork wears off. 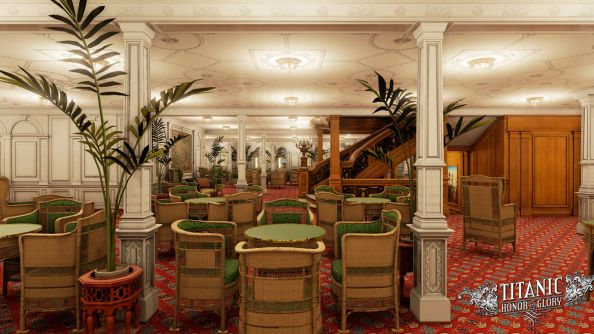 It’s all reminiscent of The Last Express, though the team have never played Jordan Mechner’s on-the-clock, eve-of-the-war adventure. There’s a similar emphasis on dialogue, too, with lots of chatting and story-driven side plots dotted about the ship.

“You have to talk to certain people, and some of these conversations just won’t go anywhere, aside from learning or hearing something funny,” said Lynskey.

Honor and Glory’s dialogue system is inspired by The Sims, as well as the “only other significant Titanic game out there” – Adventure Out of Time, the ‘96 point-and-click that predates Cameron’s movie. There, players picked from several choices in conversation and watched the NPCs react.

“If you want you can slow down and enjoy every day of the voyage in extreme detail,” said Lynskey. “[But] I’m designing it so that if you want to speed through to get to the sinking it’s possible.”

Clearly, this is a game of two distinct parts. The sinking will happen in real-time, and task players with solving their mystery and finding relative safety against the clock. 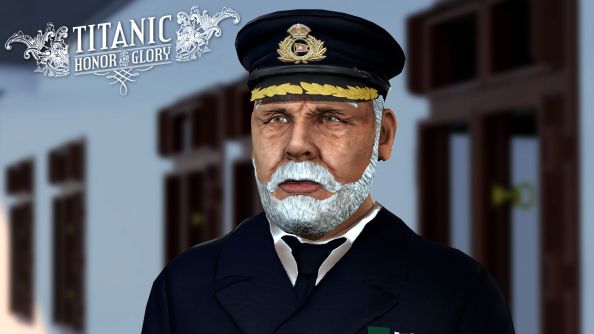 “You have to care for your health and be mindful of your tolerance to the cold,” said Lynskey. “It was -2°C when the ship sank – it killed a lot of people really fast.”

Honor and Glory began as a mod in CryEngine, but a team reshuffle led Lynskey and co. to start afresh as one of the first developers to play with Unreal Engine 4. It’s suited them spectacularly well – allowing new programmer Kyle to build scenes and lighting on “almost a professional level” after just two months with the tools.

“We find it to be the best possible engine we could imagine for this,” said Lynskey. “It’s still new, they’re still updating it and working out some of the issues, so we anticipate it will cater to our needs even more towards the end.”

The team are particularly excited about particle-based water, currently under revision at Epic.

“The physics of the water is obviously a priority for us, because we have to have it crashing through hallways and flooding rooms,” said Lynskey. “We really don’t want that flat sheet traditional water you get.” 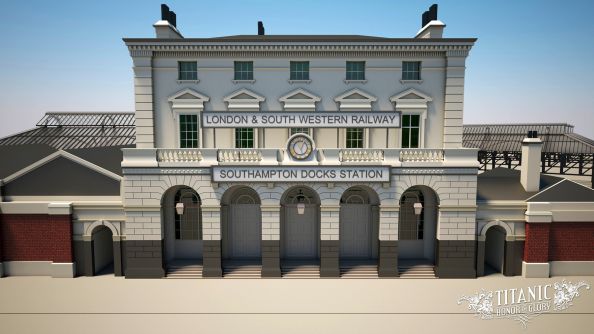 The Titanic didn’t flood evenly – first-hand accounts describe how the water shifted around, entering windows and open doors. Bulkheads contained the ocean for a while, but as the water from one compartment spilled over into the next, guests found themselves trapped in dry areas with flooded rooms overhead.

To script the sinking, Lynskey and team have had to piece together individual timelines for the 150 real-life characters they’ve modelled – pulling from detailed accounts for some, and improvising others with the “best information there is”. It’s proven to be a deeply sad process.

“You see the end of their story – you find out who survives and who doesn’t, and that’s all kept accurate,” said Lynskey.“There were people who were looking for each other, and you know they never found each other.

“But the saddest part is realising that, if they were searching for each other for an hour, they were at one point three seconds away from finding each other. It’s really heartbreaking at times. I’ve learned just how tragic it really was – as if I didn’t know already.”

Four Funnels are running an IndieGoGo project to raise funding for the next phase of Titanic: Honor and Glory. Unreal Engine 4 development is available to anyone for $19 monthly subscription fee.

In this sponsored series, we’re looking at how game developers are taking advantage of Unreal Engine 4 to create a new generation of PC games. With thanks to Epic Games and Four Funnels Entertainment.