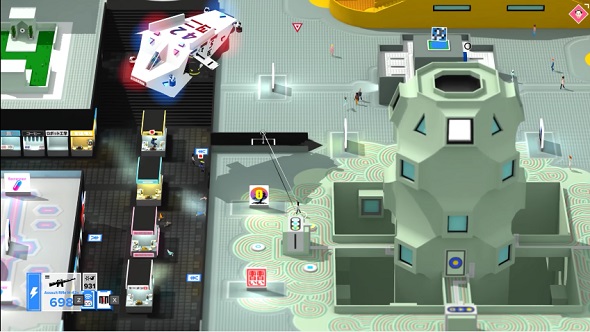 Showing off more of their isometric assassin simulator, Mode 7 Games have released a new trailer for Tokyo 42, which displays how the Tokyo police force may react to wanton murder and destruction.

If you’re one for sneaking around, these PC stealth games may be just for you.

So, you’ve started firing your gun willy nilly into a crowd, what are you gonna do when they come for you? Rather than dashing in via police cruisers, the cops of future Tokyo respond to threats with something known as the ‘Cop Drop’. Flying in via high tech dropships, the rozzers will rappel in to try to take you down, starting off with a few lightly armed officers before ratcheting up the firepower to bring you to justice.

Similar to the Wanted level in GTA, a small response unit develops into armoured enforcers, with the police bringing in officers with bulletproof shields and special riot control robots to fill you full of bullets. Players will have to carefully use cover and kite the police round obstacles, in order to stop their corpse appearing on the nine o’clock news. Picking an area with plenty of cover seems the best bet if you want to start a shootout, so don’t start firing off your arsenal in a public park with nothing to protect you.

Throwing grenades to intercept the fuzz as they are drop in seems like the best tactic, so come loaded for bear if you decide to cause some mayhem. Or maybe try being stealthy when on a mission. That’s probably the best option.