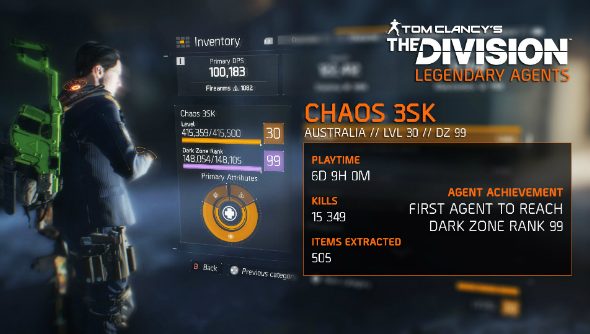 A player by the name of “Chaos 3SK” has become the first Legendary Agent to reach The Division’s Dark Zone Rank 99 level cap—after 130 hours play.

Need some help on your way to 99? Here’s a The Division Dark Zone guide to get you started.

The Australian achieved the rank after six days and nine hours of playtime, beginning his marathon session just 41 seconds after the servers went live.

The Dark Zone rank, separate from the player characters level of 30 which is attained mainly through story missions in the single-player and co-op portion of Manhattan, is gained only by grinding in the PvP area.

Also known as Chammer88 on Reddit, where the screenshot showing max level was posted, the player used multiple XP-boosting item stats and an enemy-dense farming route through DZ02. The last time they died was at rank 93, losing 85,000 DZ experience in the process.

While it’s unknown whether Chaos turned to player-killing Rogue Agent status to achieve their goal, they did extract 505 kneepads and/or backpacks, and kill 15,349 unfortunate souls on the journey. That’s still less than 1% of the total population of Manhattan (1.7million) but given everyone else is either dead from a virus or evacuated, we’re pretty sure there’s no-one left.

Ubisoft were quick to congratulate the player, and promised them more things to do in their bleak, now thoroughly uninhabited version of New York. Two free content updates–in April and May–are set to introduce player trading, raids (called incursions) and better incentives to become a player-killing nightmare in the Dark Zone.