If The Division’s development was anything like that of Watch Dogs, its E3 reveal was less montage of existing features, more statement of intent – the first time ideas and assets from a team of hundreds had coalesced into a continuous piece of footage.

We consider The Division to be one of the best co-op games available on the PC.

Return to that first trailer, however, and you won’t find a graveyard of curbed ambition. While much of The Division’s final design feels reactive – the lessons of Destiny apparent in its levelling and loot cycle, the successes of Steam Early Access requisitioned for the Dark Zone – that first pitch for a co-op shooter set against a thoroughly ruined Christmas still rings true. And right there at the beginning, if you watch carefully, you can see the bullet sponges.

Beefy enemies are no strangers to the likes of Gears of War, but they are strange in the context of Clancy. An inherited collection of elite military and geopolitical themes, this is a license that prides itself on, if not realism, then at least the ex-armed forces consultants it has on speed dial.

Any verisimilitude a shooter might have had vanishes, however, as you watch a man’s neck fill up with so much metal he couldn’t step within a mile of an MRI machine.

In the sublime Rainbow Six: Vegas, that fantasy sees you divvy up headshot targets with your co-op partner, whispering an excited countdown before downing tangos in a single frame of muzzle flare. That moment of coordinated glee is contingent on enemies who drop with just the slightest persuasion.

Yet it’s not a scenario that The Division lends itself to. Yes, you can pop the heads off the randos in the streets on the trudge to your next mission easily enough, but once down to business, you’re typically facing the likes of the Cleaners – loofahs among men, some of whom will happily absorb an entire clip and continue to brandish their flamers and fire axes.

Why would the latest Clancy game turn away from what works to scrub itself enthusiastically with the bullet sponge? A term which is, ordinarily, meant as a derogative – grounds for divorce from a mediocre shooter? 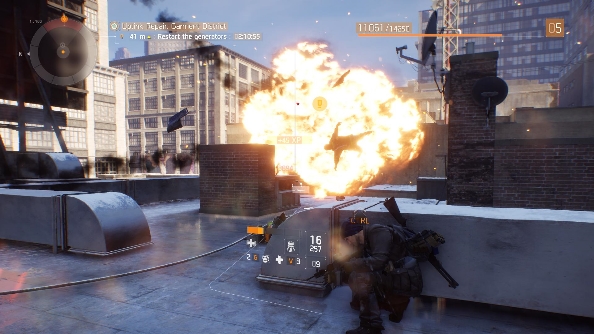 Because where usually the bullet sponge signifies the death of tactics – the point at which a game’s momentum and support for creative playstyles drains away – here it’s the only thing enabling tactics to emerge.

With four players opening fire at once, a handful of headshot-able goons are going to be gone before anybody’s so much as grunted down their headset. As designers, Ubisoft Massive had two choices: the first, turn on the tap and flood the streets and sewers with enemies. Once that’s happened, though, there’s no necessity for players to think about their targets as individuals – they’re simply fighting a swarm.

Swarms don’t engage in interesting AI routines. They don’t upset a player’s position, forcing a squad to rethink their battle lines. Even in Rainbow Six: Vegas, beyond that opening salvo, there’s rarely any cause to budge from behind a choice piece of cover in a big firefight. Swarms exist to fall down. Tactically, they’re one-note.

The second option, and the one Massive embraced, is to beef up the hit points. It takes coordination to bring down even the least well-armoured enemy of New York State, so players are forced to communicate – sharing the positions of incoming bads, halting the progress of particularly aggressive threats with turrets and suppressing fire. 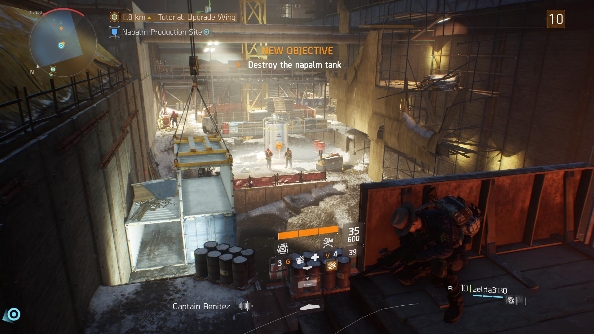 There are rewards for precision available for those who need them: a percentage chance to keep the ammo spent on a headshot, and explosive damage on offer if you aim for a Cleaner’s propane tank. And what The Division gains from its bullet sponges is a slowing effect – turning this into a far more thoughtful shooter than it could have been. One befitting the Clancy name, despite its divergence from the design principles Ubi have developed over the years of Rainbow Six and Ghost Recon.

The pace acknowledges, too, that many of us play in less than ideal conditions – matchmade with players we don’t know; strangers we don’t necessarily want to mutter sweet nothings down the mic to. The Division is treacly enough to accommodate mute play, allowing players time to notice unfortunate developments and struggling teammates – enough room to shift tactics and do something about it. When a flamethrower-toting boss reduces the last of you to ashes, it’ll be clear what approach you’ve taken as a team, and how you might alter it next time.

The solution isn’t perfect. You’ll sigh once you hit your second Cleaner boss – a big bag of hit points that requires you to fall into repetitive sequence, exploiting a stack of healthkits and perhaps a staircase pathing bug to succeed. In those moments, you’ll curse the bullet sponge. But more often than not, those big bags of hit points mean that the perfectly coordinated play of that E3 reveal – the kind performed by actors to match a lovingly scripted demo – is for once pretty much spot-on.