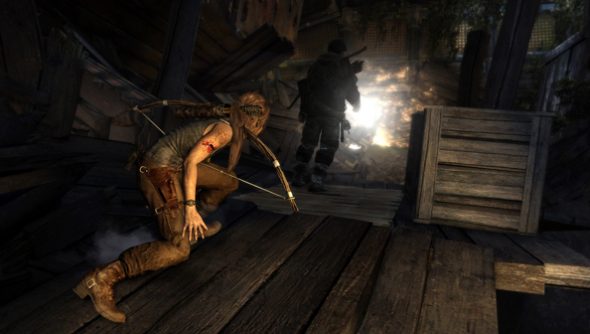 The latest video out from the Tomb Raider marketing team goes for a little more explanation than excitation – opting for the route of voiceover man telling us how the game will play instead of director person showing us what the game would be like if it were a movie; I like this shift.

It shows off the new base camps where you can upgrade your skills and equipment. It also shows off how you can Trotsky someone with an ice pick.

Check out the video we raided from VG247:

It all looks quite nifty. Though I’m getting a serious Dirt 2/Codemasters vibe from that base camp menu. It’s not like it’s a problem to imitate but for the first hour of using it I’m going to be expecting my team manager’s voice to come in over the intercom.

Crystal Dynamics have very much gone the way of the Metroid games with this edition, using gear upgrades and skill unlocks to gate off areas of the game until later in the story. It should be a good method of having us return to previous areas and spend time jumping about the place with ice pick in hand.

Though, on the subject of the ice pick: ew. That tiny slither of metal puncturing someone’s skull, I pity the animator who had to research that. Many a melon was mutilated, I suspect.

Since writing theEverything We Knowpiece for Tomb Raider I’ve been quite caught by what the new game is promising. It seems to be a genuinely inventive return to an old character and, while I have reservations about the use of quick time events, I really want to get my hands on a copy to play with.