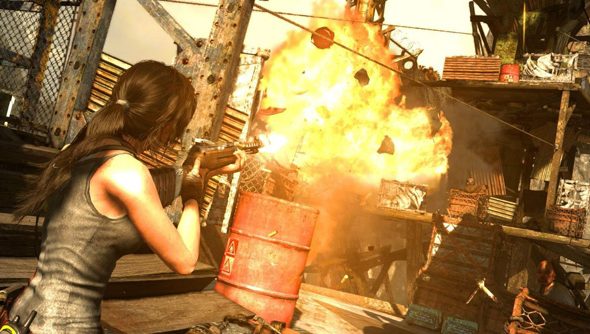 In a curious quirk of the console transition, Tomb Raider has become Square Enix’s great hope for the PS4. The publishers have put Crystal Dynamics to work on a ‘Definitive’ edition of the game, buffing up one of last year’s finest adventures for a more capable machine and resetting its price tag.

Lots of PC gamers have capable machines too, and might have hoped for a similar treatment in light of Deus Ex: Human Revolution’s Director’s Cut upgrade, which Squeenix sold to existing owners for a pittance. But the publishers have now laid to rest any hope of Lara Croft’s latest becoming any Raiderer on PC.

“Tomb Raider: Definitive Edition was designed and rebuilt from the ground up for next-generation consoles,” said Squeenix in an official FAQ. “At this time a PC update is not planned.”

The preemptively defensive FAQ goes on to explain precisely why this is no facelift, as fans have worried.

“You can see the sweat, mud, and blood on Lara,” it reads. “Her eyes are much more expressive and her hair realistic. We also improved gear movement in Definitive Edition – her axe will sway and necklace will react to movement as Lara traverses the island.”

The island itself will benefit from improved lighting effects and physics, reactive water surfaces and extra vegetation – none of which we’ll be privy to.

“When Lara stops, the world keeps moving,” claim the publishers. “We didn’t just improve the rain; we reworked it until it felt torrential – like another enemy out to get Lara.”

Not really an enemy of course. Watching the rain drain your health would be rubbish – though a terrible PS4-only design decision like that would make pretty good consolation for the upgrade’s absence on PC.

Bruised is Lara’s default state. But are you lot particularly sore about this?