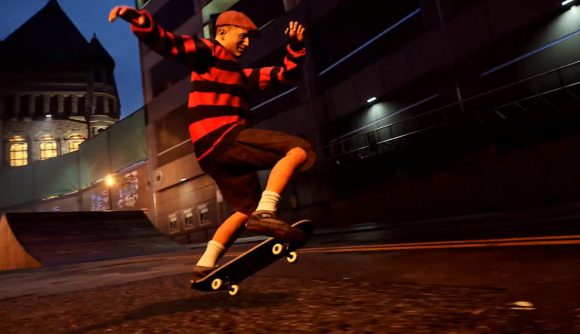 Earlier today, you might’ve gotten a text from Tony Hawk himself with news that the first two games to bear his name are getting a fresh HD remake. Now, that package has officially been announced as part of Geoff Keighley’s Summer Game Fest. Tony Hawk’s Pro Skater 1 and 2 is due out this September and will feature new and improved features alongside the skaters, maps, and music of the originals.

Vicarious Visions, the folks who built the excellent Crash Bandicoot remakes, is handling this remake, too. Tony Hawk’s Pro Skater 1 and 2 targets 4K and 60fps on consoles, so you can expect similar targets on PC. In addition to modernised gameplay – including later series additions like revert – the remakes will feature online and local multiplayer.

This isn’t the first time these two games have been remastered, as Tony Hawk’s Pro Skater HD launched in 2012 to a tepid response. That package similarly featured a selection of maps, skaters, and soundtrack songs from the first two THPS games, as well as some additional DLC from THPS 3.

Tony Hawk’s Pro Skater 1 and 2 is due out on September 4, and on PC it appears to be an Epic Games Store exclusive. The game is available for pre-order there for $39.99. Pre-orders will get access to an early demo of the Warehouse level.

#THPS is back! Break skateboarding boundaries with the fully-remastered Tony Hawk’s Pro Skater 1 and 2 collection. Available September 4, 2020 on PlayStation 4, Xbox One and PC. Pre-Order Now. pic.twitter.com/RaZQrXSNgP

After months of pro skaters accidentally announcing new Tony Hawk games, we’ve at last got something official. Our list of upcoming PC games will continue to grow amid a mass of E3-replacement events in the months to come.