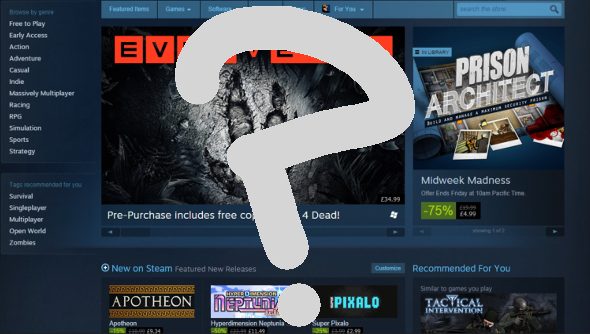 Steam’s getting a bit fat in its old age. Valve’s draconian policies regarding new games appearing on the platform once kept it slim, but Greenlight and Early Access opened the floodgates, letting in a deluge of games. And for every critical success, there are dozens of games languishing in alpha purgatory, broken but apparently complete games, and even titles using pinched assets.

Dan Griliopoulos noted, on Twitter today, that over half of Steam’s library popped into existence in the last 18 months. That’s a bit mind-boggling. So for our Topic of the Week, we want to know if you think Steam has become too bloated. Are there just too many games? And has it caused a dip in quality?

I don’t think Valve’s old policy worked. Nobody but them understood it, and it seemed impossible to know what would or would not make it onto the platform. The massive walls surrounding Steam remained long after the platform had become ubiquitous, and with the new wave of indie and bedroom developers, it wasn’t a model that could continue.

Is this any better? I’m not sure. I think it has the potential to be better, because openness and transparency are things that should be strived for, but it’s sometimes a bit hard to be all principled when faced with some of the drek that oozes out of Steam these days. But there are also treasures. And maybe that makes it all worthwhile I think that I can face a constant tide of dross if it means a few impressive games also get a chance to exist.

Anyway, enough from me. We want to know what you think. Are there too many games on Steam?