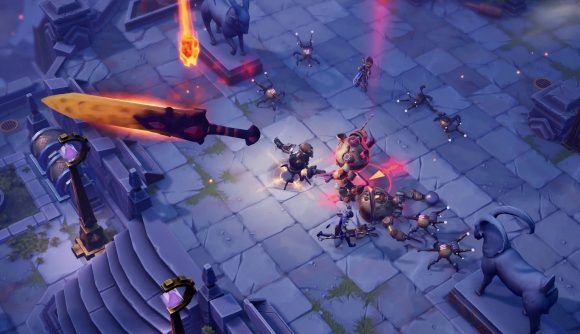 Although the team behind Torchlight 3 is somewhat different from the crew that made the previous two Torchlight games, Max Schaefer remains a constant. As Torchlight 3 finally hits Early Access after eight years, the former Blizzard dev says his time crunching on Diablo 2 was a great teacher in what not to do to sustainably make great RPG games.

“Diablo 2 was a little over a year late but nobody talks about that anymore. We crunched on that thing for the whole year that we were late at great expense to our physical and mental health,” Schaefer, now the CEO of Echtra Games, told us. “But again, once it came out, and it was good, no one ever talked about that again. But for that year, it was really tense. We had corporate pressure, we had personal pressure, and it was very tense and scary until it was released.”

He explains that while polish is “what elevates a good RPG from one that’s forgettable”, that process can’t come at the expense of anyone’s health, otherwise you’re sacrificing your won longevity. “The crunch we did at the end of Diablo 2 was not sustainable. If we had done that, again, I wouldn’t be making games today because it would have completely burned us out,” Schaefer says. “I think that’s something that plagues our industry a little bit.”

Forming Echtra Games from the ground up has allowed Schaefer shape the studio culture to be more hospitable to its creators. The team was assembled with the purpose of making a new Torchlight, initially the MMO Torchlight Frontiers before switching gears to a more conventional threequel. All-in-all, Echtra’s been at this for four years now, and Schaefer believes there’s many more ahead due to the healthier workplace.

“We have learned that it comes down to the end where you work really hard because this is it, and it’s gonna ship, and people are gonna see it, and so you work all day and night,” He said. “We have it much more manageable now. We realised that having that little bit of life work balance is essential if we’re going to be able to do a new game after this.”