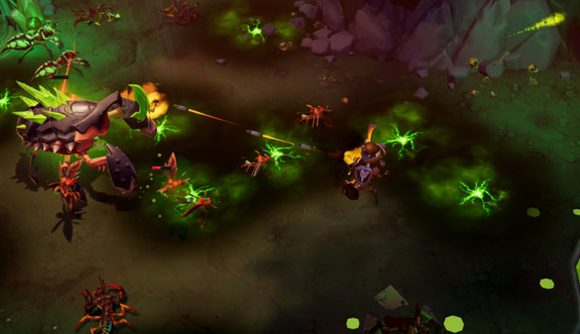 Torchlight 3, the third installment in the Torchlight series, is now available on Steam Early Access. Developed by Echtra Games, the sequel comes after an eight year long wait, bringing to a head a number of format and team changeovers.

Originally, Torchlight 3 was a free-to-player MMO called Torchlight: Frontiers, but the genre didn’t fit the Torchlight mold. “We were finding that the game was telling us that it wanted to be something different also. An action RPG is all about a rollicking good time, an adventure, and a lot of action things happening quickly,” Echtra Games CEO Max Schaefer told us in an interview. “It didn’t really lend itself to the long game loops that you have to design to monetize something. We found ourselves designing against ourselves at times.”

This was echoed by fan expectation: “Our customers were telling us, they wanted it to be like the old Torchlight style games where you buy it once and that’s it and you get to enjoy the whole world. The game was also telling us the same thing.”

The four main classes of Torchlight 3 had been revealed, Forged, Railmaster, Dusk Mage, and a sharpshooter, and Schaefer promises more are on the way, but DLC plans are hush-hush for the minute.

“I gotta be careful what I say, but just suffice to say that we are not done with this game at launch,” He explained. “We’ll be continuing to make things and we have a lot of ideas for characters if we are lucky enough to have the opportunity to continue to build this universe and it is our intention to do so.”

You can find the Torchlight 3 Steam page here.