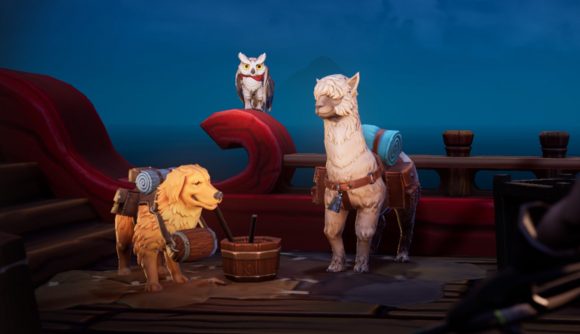 Ahead of its imminent release from Early Access, a new Torchlight III trailer is here to remind us of all the great pets the RPG game offers. Classes and forts are discussed too, in a broad overview of the general gameplay.

Three species of animal companion are highlighted first and foremost: owls, dogs, and alpacas. While good company to begin with, your trusty sidekicks each provide a combat ability to aid you in battle. The owl has its talons, that can pierce any foe, the dog bites and gnarls whatever poor creatures in its way, but the greatest per this video is the alpaca, which appears to headbutt enemies into discombobulation. I’m sure there’s a more technical term for what’s happening here, but the Alpaca Headbutt of Doom’s good enough, really.

You can save more pets from enemies, including cats and otters, for the animal sanctuary that’ll be built into your fort. Developer Echtra Games established earlier this month that all pets are created equal, strength wise, and more are coming post-launch. The rest of the trailer runs through the four classes and five relics, from which you choose one each to begin your quest, and talks up getting legendary gear from bosses.

Torchlight III had quite the journey to get as far as Early Access. After starting development as a free-to-play MMO game, it was eventually retooled to be a single-player adventure like the first two.

this trailer was revealed as part of RazerCon 2020, and you can find a rundown all the lovely hardware that was shown off here. After only four months in Early Access, Torchlight III is being fully released on Steam on October 13.