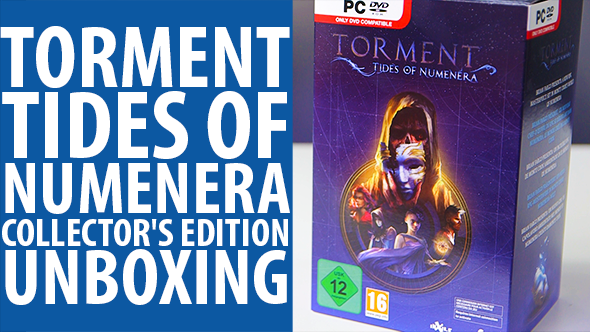 Good things come to those who wait, and boy oh boy haven’t we been waiting some time for the sequel to 1999’s Planescape: Torment. Not to worry though, as not only have we finally got our hands on Torment: Tides of Numenera, we’ve been lucky enough to get the ruddy collector’s edition. But why keep all the joy of unboxing it to ourselves? We’re all friends here at PCGamesN after all, so let’s open it together.

For an in-depth analysis of the game itself, check out our Torment: Tides of Numenera PC review.

Jordan and Matt take the official PCGamesN scissors to the well-wrapped package from Techland to reveal the goodies inside. Those goodies? A hardcover art book, game manual, Tidal Talisman, soundtrack CD, eight-inch statue and steelbook. Resident Torment expert (when Jeremy’s not around, at least) Matt talks us through the lot while Jordan does his absolute best not to break anything while the camera’s recording.

If you like the video and want more like it then be sure to subscribe to PCGamesN on YouTube. We’ll try our very best to make sure you don’t regret it. Oh, and why not give the video a like while you’re at it?