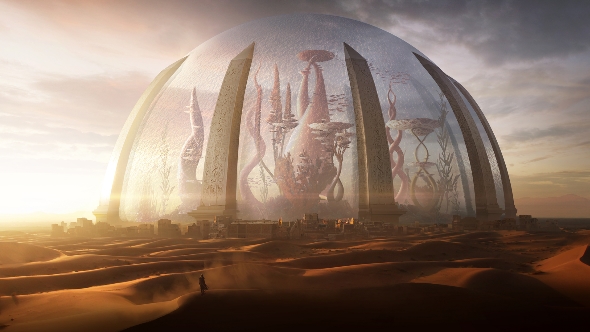 The world of Torment may well be the most imaginative gaming has ever seen. ‘Any technology sufficiently advanced is indistinguishable from magic’ said Arthur C. Clarke, and it’s a law that developers inXile have run with. The Ninth World is neck-deep in ‘magic’, AKA technology from a billion years in the future, and you can tell that the writers have had a riot of a time creating it.

“We didn’t want to go too crazy. We wanted to tell a coherent, cohesive, satisfying story that is about you,” says Colin McComb, creative lead on Tides of Numenera, as he presents his work at Gamescom 2016.

Some examples of the ‘not too crazy’ things you can do in Torment are:

As you can see, Torment isn’t just another RPG. “We didn’t want to do another ‘Hey guys, let’s go save the world from the bad guy’ or ‘Hey guys, let’s go save the princess but she’s in another castle’. It’s just like… ugh!” says McComb. “We want to make this a story about you, about your choices, about the legacy you leave behind. We believe in a reactive, believable world that changes based on what you do.”

Creating that reactive world has seen inXile’s writers embark on authoring a true epic. “We wrote over a million words. To put that in perspective, that’s more than all of the Harry Potter books combined. So, yeah, my fingers are a little tired!” laughs McComb.

‘Really weird human’ is the only race you need 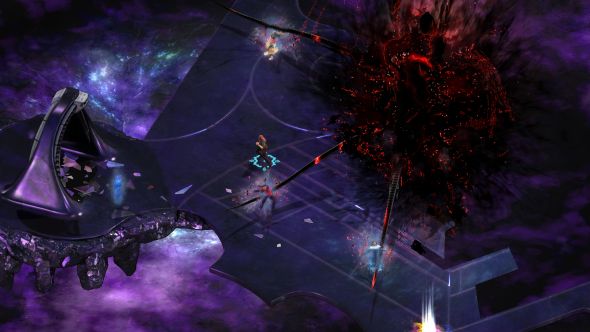 So how does the world of Torment differ from classic RPGs? Well, for a start, you won’t be playing as an elf or a dwarf. Everyone in Tides of Numenera is a human, albeit a vision of what humanity might be like after a billion years of evolution.

“We are technically not human. We are a vat-grown clone, into which the changing god has cast his consciousness,” explains McComb. “Your characters are generally human in this game, but they’re weird humans.”

As an example, McComb shows off Aligern, one of Torment’s companion characters. His arms are covered in living tattoos which can be plucked off and thrown at people for offensive or defensive purposes. Yup, these are really weird humans.

The places are weirder than the people 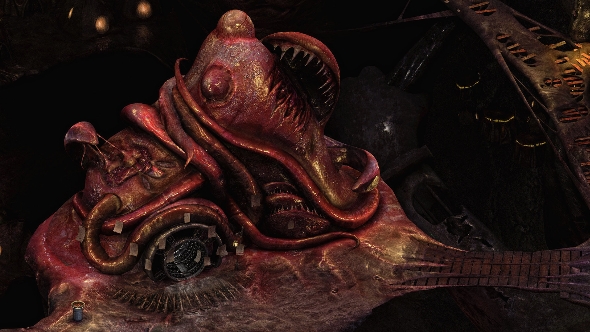 For the gameplay demo, McComb takes Aligern and the party to a place called The Bloom. “It’s an interdimensional slug beast that reaches through time and space. It’s about the size of a city. People live inside of it,” McComb gleefully reveals. “They travel its veins like roads, they live inside its organs, and they travel the interdimensional pathways to reach new worlds so they can exploit the locals for turning profit.”

As you can imagine the area is, to put it bluntly, pretty damn gross. Sci-fi structures lie half-consumed by the gloopy flesh, and orifices line the ‘walls’. One such orifice is of particular interest to the party; called The Maw, it’s a portal to another world that feeds on guilt. Provide it with enough guilt and it’ll let the party through.

Everything has a history, everyone has a story 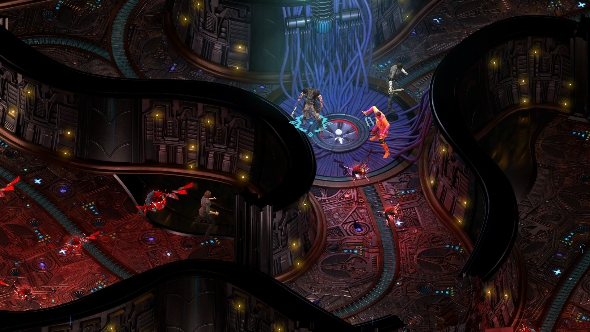 It’s time to get guilt hunting, then. McComb explains that every NPC you can talk to will have stories that could be relevant to your quest. He points out a massive square container jutting out from the Bloom’s flesh. “This is a crashed high-speed container, it’s a kind of train that reaches through space and time. A year ago, the Bloom moved into its path and so the container crashed and everybody aboard died. If we talk to the AI that lived inside there we would learn that it feels really super guilty about letting all its people die.”

He continues to explore the town that’s been built into this giant creature’s innards. “This is Hersia, she’s a terrorist who tried to poison the mutants because she believes in blood purity. She feels a little guilty now, and so she’s trapped in an invisible cage.”

It seems like literally every item, location, and person in Torment has an entire timeline behind them. But sometimes the world requires the right person to unlock its secrets. For example, there are locations that your party may simply shrug their shoulders at, but that doesn’t mean there’s nothing to see. “If we had a different member in our party we would have learned that this is the place where he was changed forever and turned into the hero we know now. But because he’s not here, we have no idea about that,” says McComb. 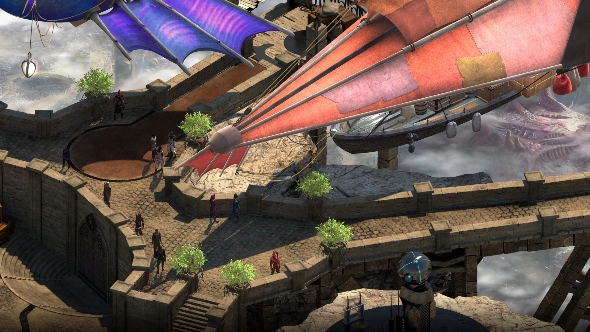 Tides of Numenera is clearly an RPG obsessed with its lore and universe, so much so it can resemble an interactive epic novel more than a videogame. But if your play style leans more on the doing rather than the saying, you’re still well catered for.

To demonstrate, McComb decides that he doesn’t want to seek out the guilty in order to open the Maw. Instead he pulls out a trans-dimensional scalpel that one of his characters had handily stashed away earlier in the game. ‘Particularly effective when cutting the flesh of the Bloom’ reads the tool tip. He has a character slice open the Maw – much to another party member’s annoyance – and opens a gateway to another world.

“This is going to have really bad consequences for us later, but right now we’ve opened the pathway to The Lost Anchorage,” says McComb. 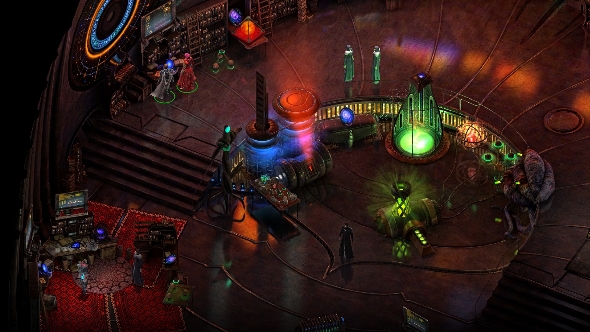 It’s amazing how different this new area is to the last. Where the Bloom was hideous and horrifying, the other side of the gateway is majestic with steampunk decadence.

“This is the home of the Last Guards, a race of people who have been trapped here on the space station when they were cut off from civilization,” details McComb. “Their religion now is based around their faith that a ship will come and take them back to their home. They have a lot of faith, they’ve been here for hundreds of generations.”

The serenity of the glittering station doesn’t last long before a fight breaks out, which allows McComb to show off the turn-based combat. It’s what you’d expect of this form of classic combat, but naturally there’s a focus on weird abilities rather than simple sword strikes. One party member unleashes mind control on an enemy who proceeds to slaughter his allies, while Aligern summons Balefire, a creature of fire, to fight for him.

And that’s where the demo ends. “I don’t think anybody else is doing anything remotely like this right now,” says McComb. “We’ve scratched just the barest surface of the story we’re trying to tell. We’ve shown you our commitment to choice and consequence, given you a little taste of what our crisis looks like.”

And I believe every word he says. Right now the classic RPG renaissance is in full swing and we’re truly spoilt for choice. But even in a world where we’ll have Tyranny and Divinity: Original Sin 2, I think Torment: Tides of Numenera is standing so much taller as ‘the one to watch’.