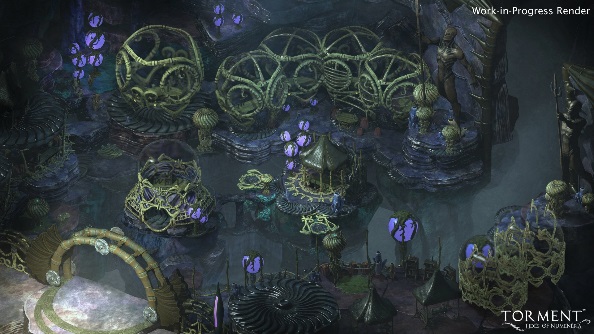 If after Divinity: Original Sin and Pillars of Eternity you’re yet to be all classic-RPG’d-out, then you’ll almost certainly have your gaze set on Torment: Tides of Numenera. The spiritual sequel to Planescape Torment has been in production for a little while now, but we’ve yet to see a concrete release date. And you’re still not getting one. But you can have this: it’s absolutely coming out next year.

If you’re looking for an adventure you don’t have to wait for, try one of the best RPGs on PC.

In a developer update from inXile, Chris Keenan explained that the quality bar was high, and to meet expectations a 2016 release was needed. “To maintain the quality standard we’ve set for ourselves, we can’t rush through these final stages to get it out the door. Instead, we’re going to take the time we need on Torment: Tides of Numenera, which means we are planning a 2016 release,” he said.

The original release estimate during the game’s Kickstarter campaign was December 2014, but things were altered to the first half of 2015, and then moved again to the final quarter of 2015. But this amendment to 2016 should hopefully be the last alteration, with only a firm date within the 366 days that make up 2016 to follow.

“An important part of our process is getting the game in your hands and iterating based on your feedback. Releasing the Crisis Alpha Systems Tests was a big step for the team. We’ve been happy to receive detailed feedback on what can be improved, and very gratified to see our backers respond that we’re heading in the right direction,” said Keenan of what inXile have been doing during recent development.

“Now, it’s on to working towards the beta release. The level art is largely done, and we’re making good progress on the general game systems, level design and UI elements . We’ll keep you posted on the progress of the beta release in the upcoming updates, as we have full intentions on releasing the beta this year.”

Hang on in there, RPG fans. Hopefully the wait isn’t too much of a… torment.