The Total War: Arena closed beta begins today, introducing the ferocious Barbarian faction, a new commander, and a brand spanking new map. Earlier this week I took the spiky-haired devils for a spin as they splashed around in the Rubicon, making some new enemies in the process.

Jumping into my first match with my Barbarian troops, I couldn’t help but notice that they were a slightly miserable bunch. Sure, they had lovely beards, but they had no armour and just wandered around in some rather thin looking trousers. A victory in the first match allowed me to start upgrading them, however, and soon they were a fearsome little army.

Arena’s upgrade system, with its multiple currencies and long list of gear, upgrades and various tiers calls to mind Wargaming’s titles like World of Tanks, which has obviously been an inspiration for Creative Assembly, right down to how they construct the tactically interesting maps – more on those later, but let’s get back to my angry Barbarian soldiers.

With experience and in-game cash, I was able to upgrade my commander, Arminius, giving my men some new abilities, and purchase new weapons. With three units and the commander himself, there’s a lot of stuff to spend experience on, and never enough going around – a more cynical man might think this is intentional, encouraging players to have just one more game. And it certainly worked, keeping me fighting battle after battle.

The Barbarians are an offensive faction, prizing brave charges and spreading fear throughout the enemy line over more defensive tactics. The first abilities I unlocked made my troops more maneuverable, conferring a short burst of speed for my infantry, and more devastating charges for my cavalry. I could make them all fired up, too, by using the frenzy ability, encouraging them to drop their defenses in favour of much more violent attacks.

They can dabble in a spot of psychological warfare as well. I upgraded one of my units with a fancy new hairstyle, spiky and intimidating, which gave them a brand new ability: fearsome presence. Essentially, they scared the crap out of their enemies with their sexy new do. Putting a mechanical spin on cosmetic upgrades is a new feature being added to the beta. 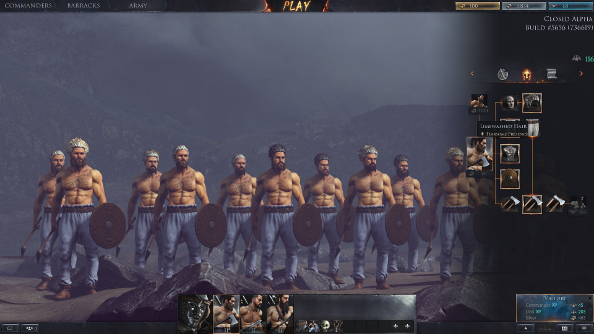 By the end of the afternoon, I was fielding tier 2 units blessed with lots of upgrades, giving me considerably more options during engagements. Finally, they were actually wearing clothes – chainmail, no less – and one unit even had helmets. They were a far cry from my nearly naked warbands from the start of the demo. I’d started to get to grips with the map, too.

Rubicon is an interesting place for a battle. It was famously the site of Julius Caesar’s crossing into Italy with his legion, breaking the law and starting the civil war that would lead to the formation of the Roman Empire and the end of the ancient Republic. “Alea jacta est,” he apparently said. “The die is cast.” I said the same thing as I crossed into enemy territory, and immediately felt just as embarrassed as you’d expect.

The map hits that sweet spot in terms of its scale: large enough so that, even with two large armies, it never feels cramped, but small enough so that you won’t spend half the battle just watching your tiny men running. In the rest of the Total War series, the maps can occasionally be too large, full of empty spaces, but it feels like every part of Rubicon has been designed to create interesting clashes. 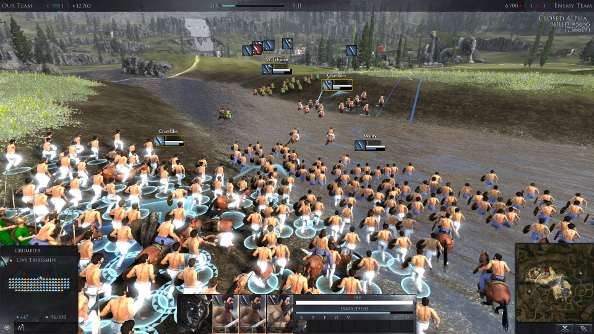 Take the Rubicon itself, the river that cuts through the map horizontally, splitting it in half. Each army needs to cross it if they want to capture the enemy base on the other side, but making that river crossing is risky. Troops in water have reduced speed and reduced melee strength, so it’s a terrible place to get in a fight. Worse, the banks are peppered with high ground, making units trudging through the water perfect targets for archers and artillery.

It’s a good map for ambush tactics not just because of the river, but because of the tall grass as well. Units can hide in the grass, and there’s nothing more intimidating than having a lovely stroll through a more peaceful part of the map, only to suddenly notice a horde of Barbarians charging out of the grass. It’s the Romans, however, who have the potential to really make use of such spots.

Along with the new faction, existing ones are getting some new abilities as well. One of the most notable ones is the Roman infantry ability that allows them to put down fortifications on the fly: giant stakes in the ground that spell death for charging enemies. Our Creative Assembly guide noted that one of the sneakiest tactics he’s seen is when a player places said fortifications in the tall grass, creating a deadly trap for any enemies charging into the area, oblivious. Eagle-eyed players will be able to spot them, but if they don’t, they’ll be in for a rather unpleasant surprise. 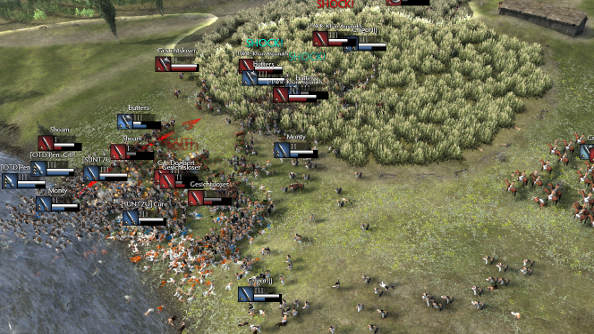 With the abundance of abilities, the different tiers and the plethora of upgrades, I worried that Total War: Arena would end up being more a game about putting in the hours to get the best stuff, rather than one that rewards skill. So far, however, that doesn’t seem to be the case. We were all playing with tier 1, 2 and 3 units, but one of the community testers popped into our game with a tier 10. Their overconfidence in their soldiers’ strength proved to be their downfall.

Certainly, the tier 10 units did a hell of a lot more damage than our fellas, and they could take quite the beating, but by rushing into battle without backup and not using the environment to their advantage, this overpowered player ended up being pecked to death by our stalwart little troops.

As Total War: Arena heads into closed beta, I continue to be surprisingly impressed with Creative Assembly’s multiplayer, free-to-play experiment. It captures a lot of what I enjoy about the battles of the main series — the unit variety and the sense of scale — while adding a whole new dynamic by forcing me to focus on just three units that are part of a greater army not under my control. Sometimes it’s a bit frustrating, when it all falls apart because everyone is running off doing their own thing, but when a team comes together, Arena provides me with some of the most enjoyable battles in the history of the series.

You can sign up for the closed beta on the Arena site, and why not read Tim’s Total War: Arena hands-on as well.