Creative Assembly probably announced Total War: Arena too soon. We first became aware of it at GDC 2013, the March before Rome II released. CA were less than half their current size, lead designer Jan ver der Crabben recalls, and when Rome II turned out to be a bigger project than anticipated, resources needed to be pulled from Arena. The fact that it went briefly into beta, before seemingly regressing into a closed alpha 21 months after its announcement, hints at a pretty tumultuous development.

Arena was announced so long ago that Tim was still writing. Here’s what he thought at one of its first hands-on sessions.

This is a shame, because – for all the scepticism of Total War traditionalists – the idea was always at least interesting. At a very casual glance it looks like a standard Total War battle, but matches are between teams of ten rather than one or two, with each player controlling just three units. Your choice of Commander – each of whom can unlock three abilities inspired by their historical tactics – adds another layer. There is nothing quite like it, and how many games can you say that about? 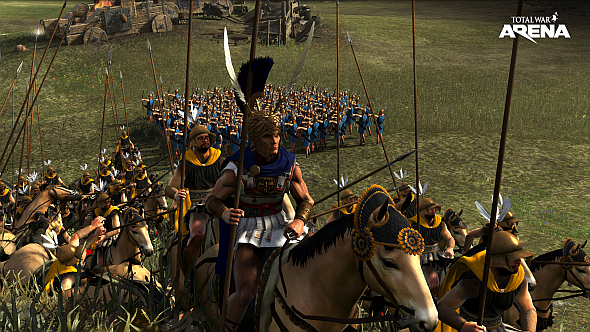 Thankfully, Arena’s rough start is ancient history. CA are now seemingly big enough to announce new Total War content just for a laugh, and after last year’s logical partnership with free-to-play experts Wargaming, Arena has a real sense of momentum. In a sign of CA’s confidence, a fully open week kicks off today, so if you missed out on a code for the closed beta, you can finally see what all the sporadic fuss has been about.

Should you? For the novelty value alone (and given that it is free, after all), I suggest you do. Its unique design incentivises teamwork and tactical thinking, facilitated with tools like map drawing and radio pings: “Our game is real-time tactics, not real-time strategy,” van der Crubben says. “Strategy is sitting down, thinking, planning it out. We’re all about reading a situation, and knowing that you need someone to support you, and knowing how to react. That’s why the communication tools are so snappy.”

My time with the game has been brief, but it proved repeatedly that matches are won by exactly this kind of teamwork and tactical agility. Maps are spaced such that there is a short period of positioning and scouting before you spot the enemy, followed by cautious poking, probing, and ranged harassment. Eventually someone blinks and commits melee troops, and while everything feels more chaotic at this point, there is just as much method in the madness. 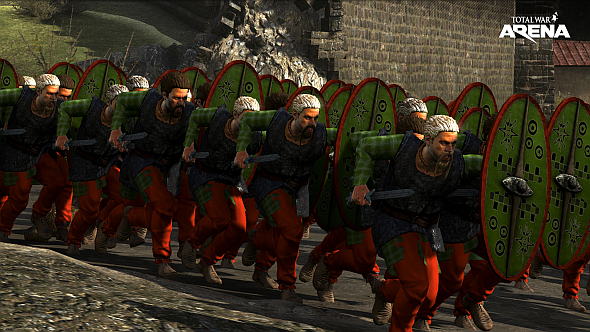 In my most successful game, I started by taking a watchtower, extending our team’s shared line of sight. An enemy Caesar tried to force me off the tower with missile fire, while one of his teammates lined up a flank charge with cavalry. I requested that one of my own allies tie up the cavalry, and used Germanicus’s Heavy Infantry Charge ability to rush Caesar, brushing aside his javelins and artillery. I then hammered the enemy cavalry in the rear, relieving my ally, and we enjoyed a fairly easy stroll into the opposing base.

My earlier games were embarrassing failures by comparison, but Arena has its feedback loop down: you will usually understand where you screwed up, and games are quick enough that you won’t have to wait long to apply your lessons. That might be by trying a new commander, for example, or a new force composition, or new tactics. As people like Blizzard have understood for ages, this is how you keep people coming back to a competitive multiplayer game: teach them the basics quickly and make it easy to try again, but give the game enough depth that there’s more to learn even after hundreds of hours.

The importance of coordination is why you are currently prevented from queuing for games in large groups – a team of ten working together with mics would be Hell for a group of solo queuers to fight. Creative Assembly also feel that it is harder to isolate one player for blame in a team of ten, whereas most Overwatch or League of Legends players – where teams are six and five respectively – have probably had sole responsibility for losing a match thrust upon them at some point.

One might worry about leavers in such large games, but Arena’s departure rate is actually very low at only 0.05% of battles, according to van der Crubben. On the rare occasion someone does leave, the RTT genre enables an elegant solution: when a leaver is detected, someone else is simply given control of their units, and the game keeps right on going. It is worth noting that Arena has only been in closed beta so far, so the current audience is probably quite appreciative of the chance to play. Leavers and toxicity might become more of a problem as the game opens up, but the facts right now are encouraging. 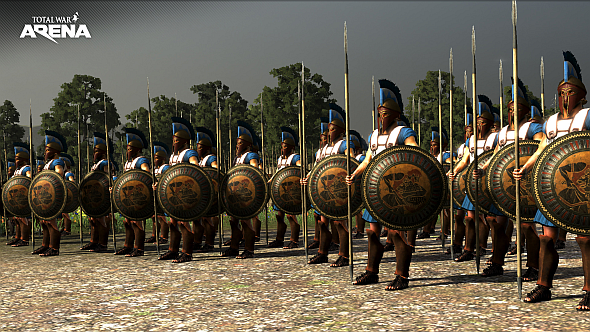 And opening Arena up is now Creative Assembly’s focus. Though it retains the systems that define Total War battles – morale, fatigue, flanking, hiding, and so on – Arena was always designed to be more accessible. It is a step away from numbers and info panels, and towards readability and intuitiveness. A recent round of map revisions has enforced this: we are shown two screens of the same forest from the closed alpha and the latest build. The trees in the former are bare and skeletal, while in the latter they are green and bushy. Not only is it prettier, but “you can much more easily see that this is a forest, whereas before it wasn’t quite so clear,” van der Crabben says. It is just one of many such tweaks the game’s nine maps have received.

Wargaming’s customary tiered structure also lends itself very well to these goals: each of Arena’s three factions have only two units at tier one, but more are stirred into the mix as you climb the ranks. This increasing complexity neatly dovetails with real history, for those of us who care about such things – Greece’s earliest units are based on its Mycenaean era, from 1100 to 1600 BC, while later tiers bring in troops inspired by Sparta and then Alexander’s periods of dominance.

New players thus learn the basics of Total War’s traditional rock-paper-scissors unit balance, before being gradually introduced to more complex army compositions. You unlock all unit types at around tier five, and the bulk of experienced casual play occurs between tiers five and seven. Hopefully you will understand what is going on by the time you get there, but if not, you are free to play at a lower tier simply by picking lower units. Tier eight is when the game gets much more competitive, rebalancing its end-of-match rewards such that you will lose currency unless you do well. “At tier nine, you have to do reallywell, and then at tier ten… good luck,” van der Crabben says. 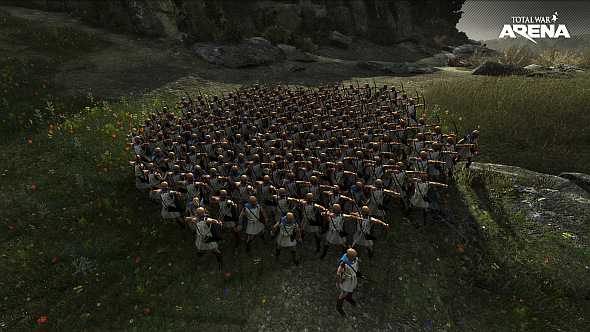 In Wargaming’s other titles, purchasing a premium account gives 50% more experience and credits per battle, which is increasingly helpful to offset these losses at tiers eight to ten. Arena will follow a very similar model, says van der Crabben – a premium account will hasten your rise through the ranks and help you compete for longer at the endgame, but “you can play at tiers six and seven and have a very similar experience – it’s not the endgame, but you have access to the same tool set.”

There are a few other differences. “It’ll take you less time to reach tier ten than World of Tanks, and currency losses are more controlled,” says van der Crabben. “We feel – for our game – a slightly softer approach is the better one.”

You can also buy commanders, either for experience that you earn in-game, or for real money. They are quite cheap in both cases, so you can unlock them quickly. “We’ve also got premium units, and we’ll probably have more customisation options than World of Tanks, simply because you can dress up a warrior in many more ways than you can paint a tank.”

That said, CA say they will not push the cosmetic side too hard, too soon – they understand (and share) the respect for history that many Total War fans hold. So no neon pink greaves or cannabis-festooned hoplons. Early cosmetics will be gentle feelers to see how the community reacts. 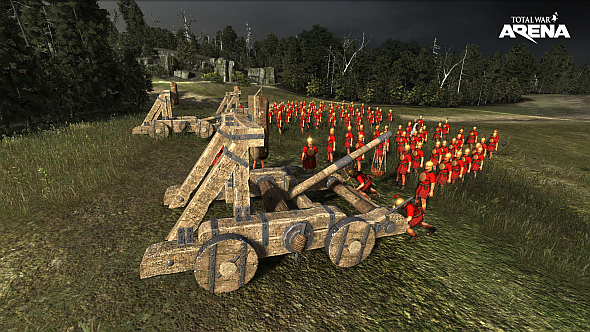 But I’m getting ahead of myself, worrying about monetisation. Given how long it has taken to get here, it feels significant enough to simply say that CA are ready to show Arena to a wider audience. The core of the game is in place, and van der Crubben says all that is really left is polish – playtesting, balancing, tweaking. A quick look at the subreddit suggests that the game is in fairly serious need of this, but that is okay. At least no-one doubts the concept anymore, or that we will get to see a lot more of it soon.

Of course, there are still plenty of Total War fans who will never be interested, but perhaps just as many competitive RTS or MOBA fans who were always a bit curious. So if the basic idea ever grabbed you, now is the time to get excited again –US readers can go here,andEU reader hereto get involved in the free week. Let us know what you make of it in the comments.