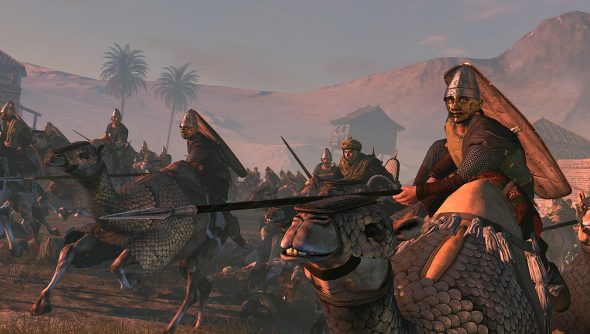 A new set of factions are poised to join the empires and tribes of Total War: Attila in their quest to conquer the nearly post-apocalyptic world of late antiquity. The Empires of the Sand culture pack brings three new playable factions to Creative Assembly’s strategy game, all part of the Desert Kingdoms cultural group.

Aksum, Himyar and the Tanukhids will all be available from September 15th. You’ll be able to play them in the grand campaign, but a new, separate campaign will also be available as part of the DLC, along with new horde gameplay mechanics, events, religious features and a substantial batch of unique units, over 50 in total.

Religion is the focus of the DLC, with three new religions available. Aksum, a faction with a strong trade focus, can choose to follow Eastern Christianity or Semitic Paganism; Himyar, a powerful Arabian kingdom that’s learned to make the most of its inhospitable desert environment can choose between Judaism and Semitic Paganism. The Tanukhids are a horde faction, and don’t get to choose.

The new religious features are connected to other parts of the game, from building chains to victory conditions. For instance, dual religion building chains means that the Aksum and Himyar factions have religious building chains for each other their main religions, regardless of which one they officially follow.