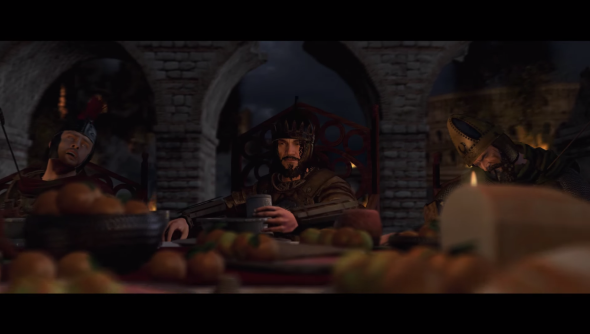 I went to one dinner where everyone ended up with food poisoning which saw them blasting semi-fluids out of two major orifices (orifici?). It’s the only time my bum’s had an affinity with a dolphin’s blowhole. As bad as that dinner was, it doesn’t compare with the dinner hosted by Attilla the Hun in the new Total War: Attila trailer.

Someone needs to sit down with Mr The Hun and explain your role is to make introductions, provide an inoffensive meal, and make sure no one goes home too drunk to drive. You don’t poison everyone, arrange their bodies in chairs, and then burn down the city. At least, that’s not how I was raised.

How this dinner play into Total War: Attila, a game of grand strategy and tactics, I can only guess. Maybe its a new sub game within the Total War stew, you already have a campaign map, real-time battles maybe this will be Creative Assembly’s take on Cook, Serve, Delicious! You play Attila, a young restauranter trying to make his way in the world by catering for Roman geneals. Maybe, it’s a special in-game event where all the ancient world leaders down tools once a month to share a meal and talk about politics, what’s on at the theatre, and their concubines.

Only time will tell, and we don’t have long to wait, Total War: Attila’s release date is February 16. If talk of defecating blowholes hasn’t put you off Attila for life you can read my Total War: Attila preview.