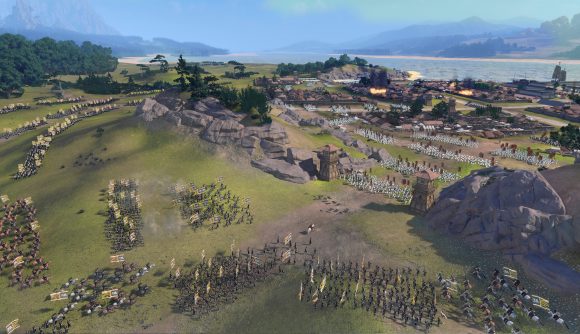 The closed beta for Total War: Elysium is ending this month, and to thank the players who’ve taken part, developer Creative Assembly is offering a free game. The selection is limited to four strategy games: three older titles in the Total War series, and 2019’s Total War: Three Kingdoms.

In a blog on the official site, anyone involved in the beta before December 9 can have one of four specific games from through-out Total War’s history. The definitive editions of Total War: Napoleon, Total War: Empire, and Total War: Medieval 2, all released between 2006 and 2010, are on offer, or there’s Total War: Three Kingdoms, from last year. Presumably the logic is you might be an older fan, who has since lapsed on the newer releases, or you came to Creative Assembly’s work relatively recently, and might want to dip into the back catalogue.

Players have been putting Total War: Elysium through its paces in closed beta since May, when the free-to-play CCG was announced. This testing period ends on December 17, at which point Elysium goes offline and Creative Assembly will start going through all the feedback. “We’ve made a lot of improvements, added some powerful new Generals, and played some tense games with all of you over the course of the closed beta,” the post reads. “As well as all that, you’ve also given us tons of feedback on every aspect of the game. While we’re offline we’ll be going through it all and improving Elysium even more for when we return.”

To redeem your free game, you copy your Elysium user ID in the settings menu, then go into your Total War Access account – or set one up – linking your Steam account, and enter your Elysium ID number. Total War: Elysium was expected to release this year, but that’s obviously been pushed back. The card game will be available on PC and mobile.

Creative Assembly put out Total War: Troy earlier this year, and the studio revealed in November that it’s working on new IP. If you end up getting Total War: Three Kingdoms, here’s a guide to all the DLC.