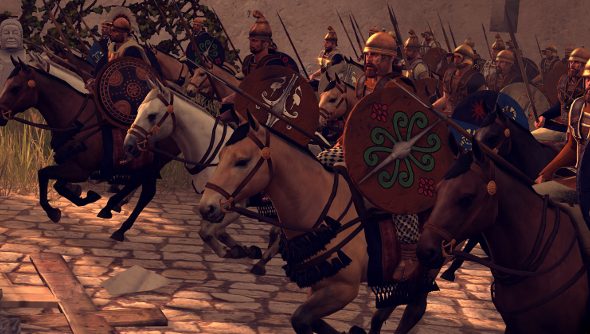 Antiquity is busy today, as Rome II’s patch 16 pops into existence with performance improvements, tweaks to battles and campaigns, and balancing changes. A little more glamorous are the two bits of DLC which also launched today, and one of them’s free.

You’ll need to shell out £5.99/$7.99 for the Black Sea colonies pack, which comes with three new factions along with new cultural traits, faction traits and units. And if you’d rather keep your cash safe, you can still get Rome II’s 12th piece of free DLC, the faction of Massilia.

The Black Sea factions are Greeks-turned-Celts, settlers from Greek city states that settled far afield and mingled with the locals. The three factions are Cimmeria (not to be confused with Conan’s people), Pergamon and Colchis. Each faction gets two cultural bonuses, improving research and cultural conversion, while they get their own unique faction traits, too.

Massilia is another hybrid faction, with Greek settlers and Gallic tribes.

“Massilia is a state of skilled traders and eloquent diplomats, but being somewhat conservative, the populace is less tolerant of foreign cultures within its boundaries,” says Creative Assembly. “In battle, her warriors demonstrate a blend of Gallic and Greek martial techniques and armaments.“

Take a look at the next page for the full patch notes.