The Family Tree, a staple feature of historical Total War games, is finally being added to Total War: Rome II as part of the free Ancestral Update. Said update will also make a number of gameplay changes, including a thorough rework of character skills, and some impressive visual improvements.

The update is in open beta now so as to identify any wrinkles, so you’ll need to opt in. To do this, right click Total War: Rome II – Emperor Edition in your Steam library, go to Properties in the drop-down menu, then to the Betas tab. Under the drop-down menu there, you’ll be able to opt into the ‘ancestral’ beta. If you’d rather wait, the update will be rolled out to all users at a later date.

The Total War series features regularly in our list of the best strategy games on PC.

The Family Tree is a visual representation of the character relationships within your faction, and an interface through which you can mess about with those characters for your own ends. Its omission in Rome II has been a steadily rumbling source of frustration for players, since it exists in almost every other historical Total War game, and since political intrigue is such a hallmark of the Roman period.

Rome II’s family tree looks pretty intuitive for anyone who’s played a historical Total War before. Your family is given in the central panel, while characters who are members of your party, but not yourfamily,are listed in the ‘Other Nobles’ panel on the right. There’s another panel on the left for Important Characters who are members of other parties – and thus may turn hostile.

There are 24 potential ‘Intrigues’ – special character interactions – in the game, of which each character has access to a certain number depending on their roles or stats (generals have different Intrigues than politicians, for instance). 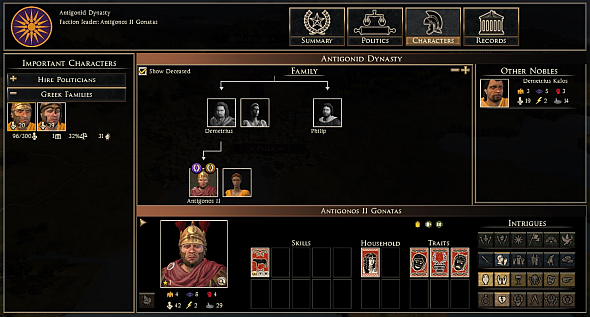 Elsewhere in the Ancestral Update, agent skills have been “completely reworked, rebalanced, and are now culture-specific.” Agents have more actions, some with significant new effects, and generals’ skills are also now culture-specific. You also get more household ancillaries and character traits.

Head here for the full patch notes from Creative Assembly, and take a look in particular at the before and after shots of the world and battle maps – looks like the game is about to get a lot prettier, with MSAA anti-aliasing and improved shadows and reflections.