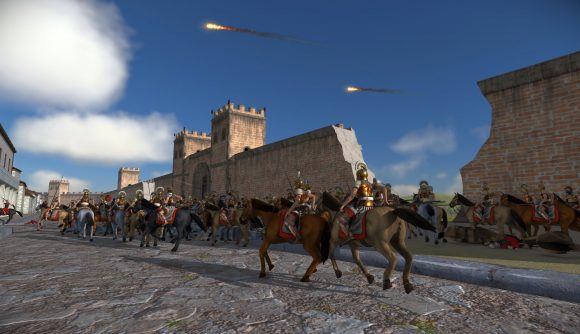 What a time to be alive: Creative Assembly is remastering the original Rome: Total War for the modern era, and it’s due out later this month! A firm favourite among die-hard Total War fans, it’s technically a very clunky strategy game, but one that’s managed to endure in the hearts and minds of series veterans for so long thanks to its mod scene.

Modding was mentioned during the announcement last week as an area for improvement, but until now we’ve not really had a complete picture as to how mods are getting help. During a Q&A on Discord (found via r/TotalWar user tjrolex), the studio in charge of the remaster – Feral Interactive – confirmed it’s lifting at least some of the limits that the original engine imposed on the community.

Modders for this classic Total War game have always had to deal with some hard blocks on what they were able to do. Caps on the number of factions that could be coded in, as well as on how many towns could be on the map, even how many units you could have in a faction’s roster severely limited any mod’s scope.

Rome: Total War mods were actually my first foray into the realm of modding games; before that I’d been a bit of a scrub and just played everything vanilla. Then I discovered Roma Surrectum, one of the more popular mods for the game.

Faction Cap Will Be Lifted For RTW Remastered from totalwar

It was during the development of Roma Surrectum 2.0 that I first saw mentioned the issues the mod team were having with the engine’s hard limits. One of the ways they managed to get around the faction cap was to create sub-mods for the main RS mod, which allowed users to pick which minor factions they wanted to include in the game.

Now it seems they won’t have to resort to hacks like this, and new towns and settlements can also be added to the map as well. The only thing that hasn’t been confirmed yet is whether the cap on unit rosters is still there.

Feral Interactive is best known for porting popular strategy games to MacOS, and has previously handled Rome: Total War’s mobile port. As part of the remaster’s release, the studio will be keeping in touch with the mod community to find out what features they need in order to port their creations over to the new version.

This could usher in a new era of mods for Rome: Total War, and generally help give the remaster a fighting start by drawing in those who only play the classic game for the mods. Which is probably everyone.