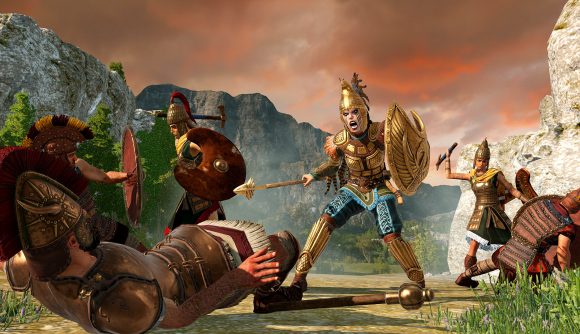 Ahead of the arrival of  A Total War Saga: Troy’s new expansion in a couple of days, Creative Assembly has released the patch notes for the accompanying free update that will drop at the same time – which also coincides with the strategy game’s launch on Steam.

The free historical mode and the new administration systems are dropping as ‘free-LC’, but patch 1.6.0 also brings with it a wide range of bug fixes and tweaks. Hector’s campaign has now been given a new difficulty rating of easy, where Sarpedon’s is considered normal. Horde factions will get targeted by the AI less, which will hopefully let them survive a bit longer in campaign games, and there’s plenty of other changes to events, buildings, faction mechanics, and even the new photo mode.

The new historical mode completely removes mythological units and supernatural abilities from the game, with some heroes getting a complete rework to how they function in tactical battles. Heroes also get bodyguard units now, instead of fighting as one-person armies, and even the colour palette in historical mode is more “subdued” and naturalistic.

A Total War Saga: Troy’s upcoming Mythos expansion goes in the other direction. Doubling down on the setting’s mythology, it adds new titanic monsters for you to track down and bring to your cause, as well as transforming existing units into their fantasy counterparts.

Make sure you read our A Total War Saga: Troy – Mythos review ahead of its release on September 2, via Steam and the Epic Games Store, along with the 1.6 patch.