Aeneas of Dardania was the son of the goddess Aphrodite and Prince Anchises, cousin of King Priam of Troy. Legend states Aphrodite appeared before Anchises as he was tending his cattle, seduced him, and bore him a son, Aeneas, whose care she entrusted to the nymphs of Mount Ida until Aenaes turned five, when he was returned to his dad.

As second cousin to Hector and Paris, Aeneas fought alongside the Trojans in their war against the Achaeans. Like the other heroes of Total War Saga: Troy, he features in Homer’s Iliad – but Aeneas is also a key figure in Roman mythology. After fleeing Troy for Italy at the end of the Trojan war, Aeneas supposedly became the ancestor of the Romans as described in the Aeneid – an epic poem by the Roman poet Virgil and inspired by Homer’s work, in just one of many examples of Romans ripping off Greek culture.

Throughout the Trojan war, Aeneas is a formidable warrior who is saved from death by the gods several times so that he can survive to fulfil his destiny. Thanks to his early instruction by the nymphs, he’s able to read divine omens, allowing him to earn the favour of the gods. That’s important, as attaining 300 favour with all gods is part of his Homeric victory condition.

On the flipside, Aeneas is also able to commune with the spirits of dead heroes to receive various buffs, which will insult the gods, so be cautious. If you dig all the fluffy mythological stuff underpinning the Iliad – and you do, obviously – Aeneas is a fun and flavourful campaign to play in which you’ll engage more deeply with the gods than any other.

Aeneas’s first conflict is with King Merops of the Apaesos. He’s got one broken army that you will absolutely smash, and three whole settlements for you to take. Note that Ilion Hyrtacidae will colonise Arisbe on the first turn unless you get there first, so you’ll need to do that, even though it’ll cost you a lot of Aeneas’s army. Recruit and replenish as quickly as you can, and even though Apaesos will send a hero to Pityoussa, it’s still possible to take it and unify your home province on the second turn. Keep the momentum up and take their remaining settlements.

With the Apaesos taken care of, we suggest you go north and east in search of further territory, after the Trojan and Thracian factions on the coast of the Black Sea – let Hector and the Ilion Hyrtacidae divide the eastern mainland between them. It’s not in your interests to fight potentially powerful and dependable allies for this territory when there’s plenty to take from less friendly neighbours – with a bite-sized two-region province and nothing else, the Chersonesos are an obvious place to start, and hey, the Mysia and Dindyma already dislike you. 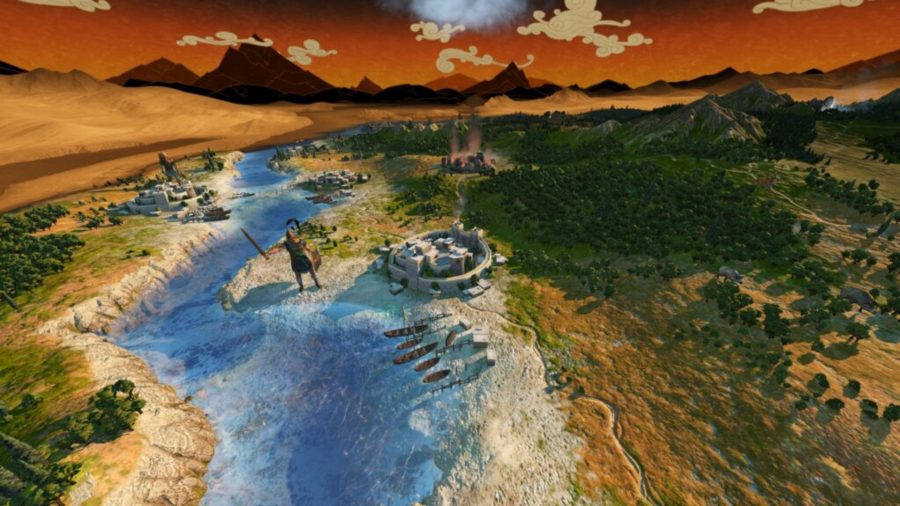 The Manyan Phrygians are also not your biggest fans, but they share many of their regions with Ilion Hyrtacidae, with whom they also happen to be at war, so it’s unlikely you’ll ever be their first target. If they should come after you, feel free to help Ilion Hyrtacidae in taking them out and see if you can trade territories later to consolidate some provinces.

In the longer term, you can head west and toward Greece, or take or confederate some of the lucrative islands in the northern Aegean – Thasos has a gold deposit, Saos can build a Pyrrhichios Arena, and Myrina can build a Cyclops Cave. Otherwise, your campaign should primarily be guided by Aeneas’s epic quest – the buffs from Stygian Voices can be helpful, but probably shouldn’t take you too far out of your way. In battle, your Dardanian mobs and rabble aren’t particularly powerful to begin with, but they’re cheap and they can be buffed – focus on improving light infantry through royal decrees and courting the favour of the gods. 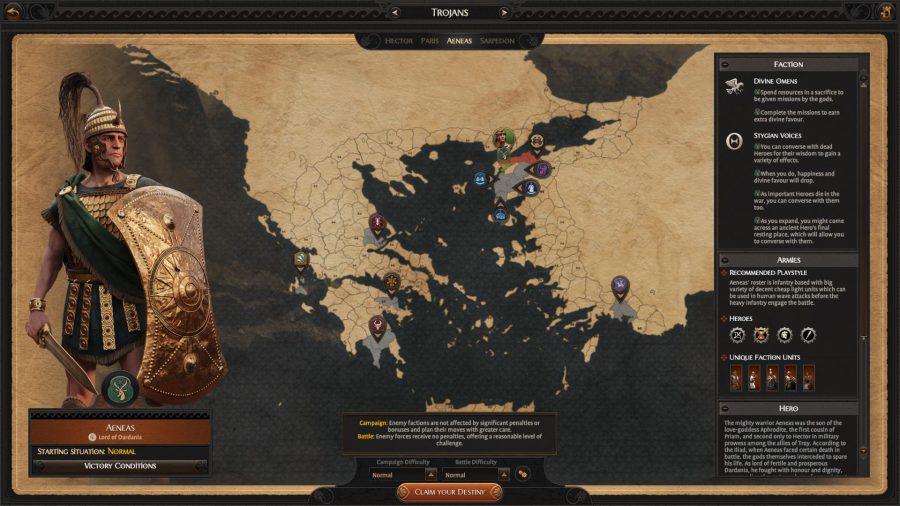 ‘Omens’ become available periodically (four turns from the start of the game). They cost a certain quantity of resources to read/interpret (300 food, 50 bronze, 20 gold for the first). They unlock three missions, each of which will earn the favour of a particular god. This ties into your Homeric campaign goal of earning 300 favour with every god. 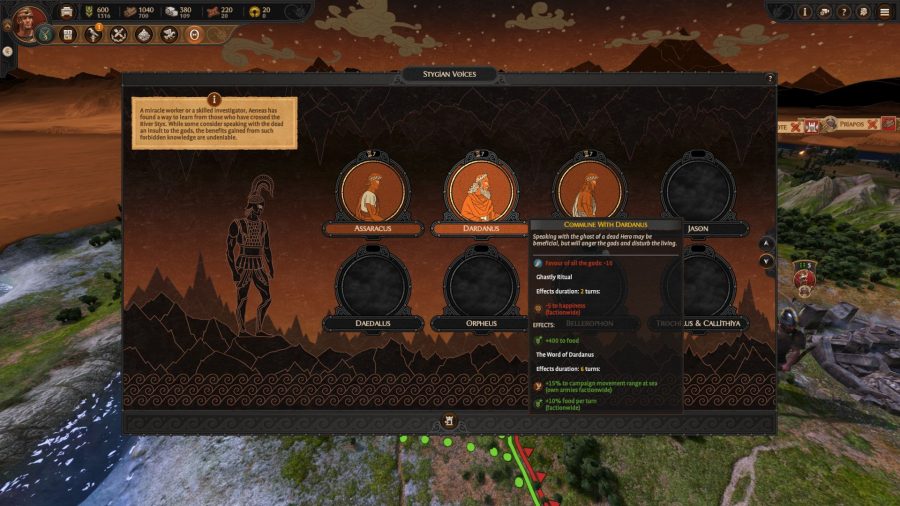 Aeneas reckons he can speak with the dead. You get a gallery of dead heroes that you’re able to commune with pretty much whenever you want. Doing so costs -10 favour with all gods since speaking with the dead is deemed an insult to them, and incurs two turns of -5 happiness factionwide, but each hero will grant a few different buffs that can be quite handy. You start with three:

You can unlock more heroes to commune with when you meet certain conditions:

You can speak with the living legends in the game too (Menelaus, Odysseus, Achilles, Sarpedon, Hippolyta, Penthesilea, Hector, Paris, Agamemnon) but only once their factions are destroyed.

Aeneas has an infantry based roster, with lots of variety in decent, cheap, light units that can swarm the enemy ahead of heavy infantry. He can’t recruit defender type heroes, but has five uniques, including Dardanian Rabble and Dardanian Mob (light two handed spears/spear and shield, both with good morale – so no easy routs – and the expendable trait). He also has Dardanian Chargers and Dardanian Defenders, respectively two handed club and club and shield infantry, both heavy with special missile weapons, and finally Fearless Swordsmen: heavy sword and shield, experts in flanking with special missile weapons.