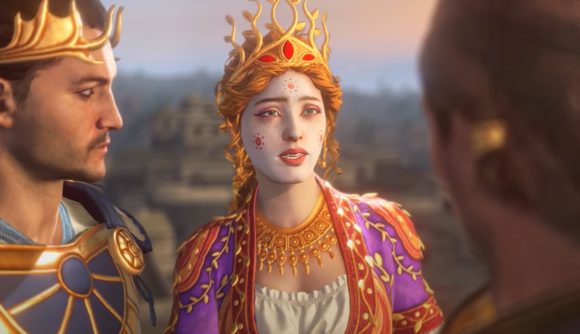 Total War Saga: Troy is going to be a timed Epic Games Store exclusive, and free for 24 hours after launch. Developer Creative Assembly says this deal is only for Troy, and there are no plans for Epic exclusivity on future Total War titles. The plan “in principal” is for future titles in the series to launch day one on “as many store fronts as possible”.

The devs say in the announcement that they’re trying this with Troy in part because “Saga titles allow us to experiment”, and also because nobody’s yet had the chance to pre-order the game on Steam. Creative Assembly wants to “reach new audiences”, and “as a business that means putting Total War onto new platforms so that it can reach more players”.

For now, the new platform is coming at the exclusion of the old one, but “in principal we’d like future Total War titles to be simultaneously available, from launch day, on as many store fronts as possible.” Creative Assembly says “this is a one-time, one-year exclusive deal for Troy”. The devs are taking advantage of the Epic launch to build “expansive back-end infrastructure development that will allow us to expand into multiple stores”.

The devs have similar sentiments in their official FAQ: “We would like future games to be available on the Epic Games Store, but that’s in addition to being available on other platforms”. That FAQ also reveals, however, that there are no plans for cross-platform play between Epic and Steam versions of Troy.

“Finally, we’ve got just one favour to ask – however you feel about this, please keep any criticism to the studio as a whole, and don’t take it out on individual employees that you might find on various social media platforms.). We get it. It’s unexpected. But they’re not going to be able to change anything, and probably weren’t the ones who made the decision regardless.”

A Total War Saga: TROY will be released on the Epic Games Store on 13 August 2020 – and will be free to keep if claimed within the first 24 hours of release: https://t.co/E1RkT3jZON

The Total War Saga: Troy release date is currently set for August 13, 2020 – if you want a Steam version, you’re going to be looking ahead to August 2021. There are plenty of strategy games to fill the gap, whether you’re waiting a few months or a year to check out Troy.