Hector is the dutiful son of Priam and champion of Troy. Famed for his fighting prowess, noble nature and dedication to his family, Hector heroically led the Trojan forces in defence of their land, in the war his brother provoked by stealing Helen away and bringing her back to Troy – though he did not approve of this war and criticised his brother’s indiscretions, he nonetheless carried out his duty with skill and bravery. (Apart from a few displays of cowardice and temper in the Iliad that the 2004 movie forgets and which make him a more complicated character, but whatever.)

The Trojan war saw Hector take down several Greek rivals, including Patroclus, whose death sparked Achilles to rejoin the Achaean forces and eventually bring about an end to Hector’s life. Though Hector dies a hero’s death, the cool thing about A Total War Saga: Troy is you get to rewrite the story. You can ensure the good guy wins for once, have Hector triumph over Achilles, defend his city from the greed of Agamemnon, and even ascend to its throne and counter-attack to punish the Greeks for their wrath before returning home to his beloved family.

As the champion of Troy and its foremost defender, Hector’s campaign is all about diplomacy and defence. You’ll build a network of allies to strengthen the kingdom and your forces. Such allies will give you several buffs that aren’t such a big deal while your influence is small, but by the time The Assuwan League collectively controls 60 regions, you get a blanket -20% off army upkeep, +20% campaign movement, and +30 to morale. Pretty crazy. On a more personal level, you’ll be competing with your wimpy brother Paris for the affections of your father, King Priam, with the assimilation of Paris’s faction and the city of Troy your ultimate reward, leaving you more than equipped to eliminate your family’s rivals. Just make sure your brother doesn’t steal your thunder.

First order of business is to defeat the broken Makarian army and take Gargara to secure your starting province of Ide – a completely trivial goal that you can easily achieve on your first turn. The Makarians are tougher than some initial opponents in that they have two further settlements on Lesbos to the south, but don’t be deterred – Lesbos gives access to stone, bronze, and a myth unit (harpies) and thus is highly desirable, especially in the early game. Methynma, which holds its third and final region, are friendly – but they have no allies so you may as well take them out to unify the island.

After that, you need to decide whether you want to make some further conquests or start building your network of alliances. Note that, in the rich lands to the east of Troy, Tereia and especially the Manyan Phrygians are not your biggest fans, have ‘your future heartland’ written all over them. Further to the north, your homeboys Aeneas and Ilion Hyrtacidae are ripe for developing as allies, and are not much liked by the Apaesos or the various Thracian cultures further north still, all of whom will consequently make excellent conquest targets in the longer term. 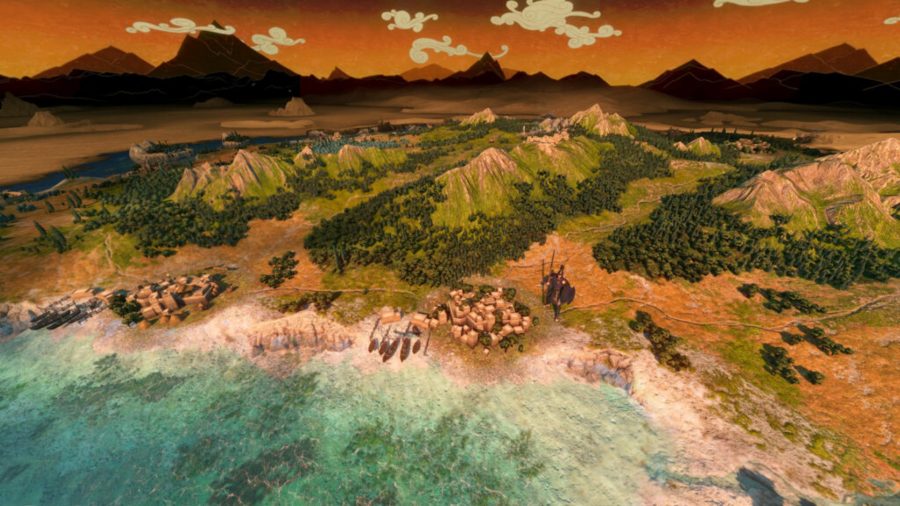 Fans of having unified, contiguous territory (like us) may lament that Ilion Hyrtacidae have many holdings in this region, but the point of the Assuwan League is that it should control a lot of territory, and both Aeneas and Ilion Hyrtacidae tended to snowball into pretty major powers in the games we’ve played. You’re free to kick off at them (or confederate them, if you can) if you really want their land, but you should make friends with someone as the Assuwan League is so powerful at the top tier. To that end, look south: Hippolyta’s Amazons, the Carians, and Sarpedon are trickier conquest targets who are easy to befriend and also tend to develop into late-game powers.

The usual downside of making alliances in Total War – which is to say, getting sucked into wars you don’t want – has not gone away, but because of the way Troy is set up, you’ll probably be joined by many others who will absorb the brunt of the Greeks’ attentions. Note that your prime territory is inland, and people like Paris, Aeneas, and Troy will shield you on the eastern coast. You can then reinforce at your leisure – truly, Hector is a defensive powerhouse. Otherwise, don’t forget to pursue Priam’s favour aggressively – it gets much harder to win his affection at higher tiers, so build up as big a lead over your snotty younger brother as you can. 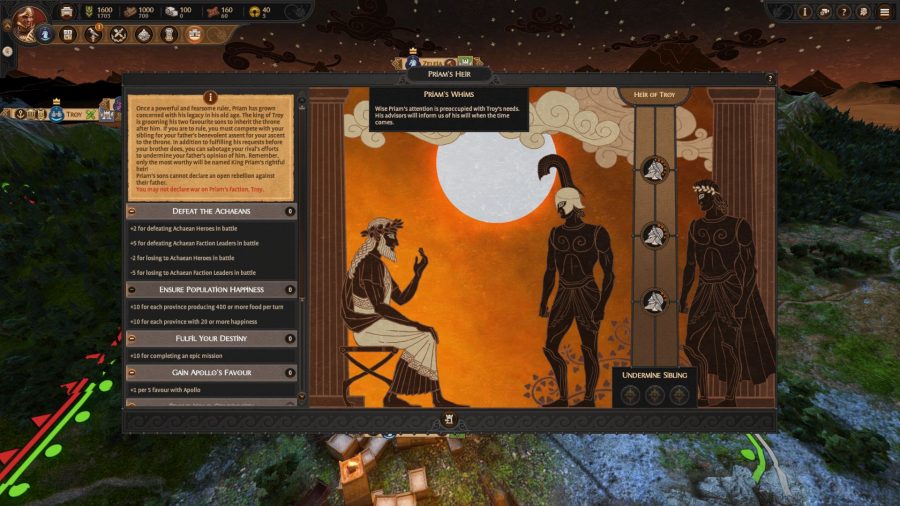 Compete with your brother Paris to be named heir to Troy. When you hit 400 favour with your dad King Priam, he vacates the throne for you, and both he and your brother confederate into your faction – and you assume control of the city of Troy.

There are three tiers of favour before you get to 400, with each tier unlocking increasingly powerful buffs, and a special hero sent by Priam.

The things you do to earn favour change at each tier. You recieve +10 favour for each mission in your personal quest chain – that remains constant. Others vary hugely, starting easy (gain favour with Apollo, defeat Achaeans, keep your provinces happy and well fed, etc) and getting much harder, up to conquering settlements around the Aegean, razing Achaean settlements (esp Mycenae), etc. This ensures that the contest will last for most of a campaign and that it’s difficult to feel too confident in your lead, as if you’re on a higher tier from your bro, it’s not too long before even the AI will catch up.

You can also undermine your brother, causing him to lose 10 favour with Priam (and diplomatic opinion of you) if he’s too rich (300 gold ahead of you), gets wounded in battle when you’re not, or is in the same province as you with a lower level. Nothing wrong with a bit of healthy competition. 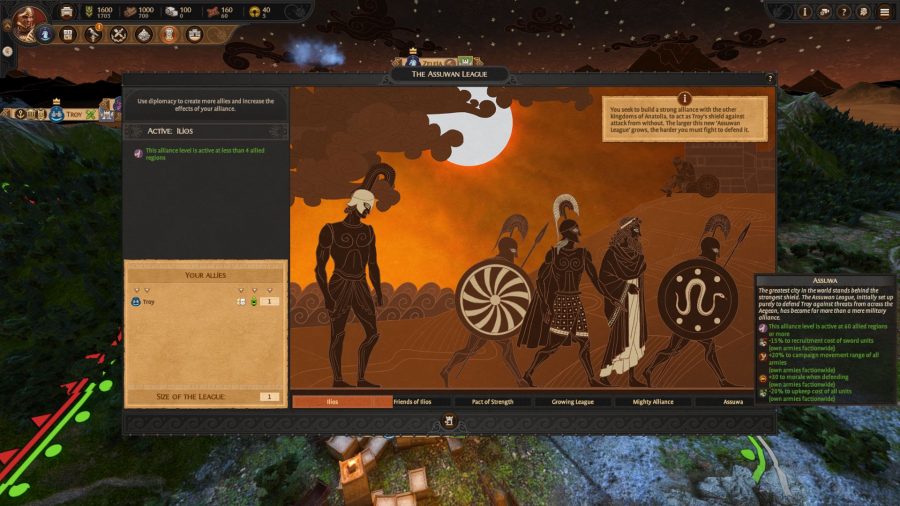 You get buffs as you build a bigger alliance with the other kingdoms of Anatolia. The size of the league is measured by the number of regions all its allied members control:

Hector has tough, heavy, expensive, well-armed units that can hold the line, not run, and grind the enemy down in crushing frontal attacks. Hector can’t recruit archer heroes, however. Hector’s Chosen are medium sword and shield infantry, immune to flanking with excellent attack; Champions of Troy and Guards of Troy are heavy spear and shield infantry with good defence and shielded/switch weapons, plus champs get a special missile weapon.

May the gods favour your Trojan defense – if you’d like a change of pace, we’ve got a Sarpedon guide, Paris guide, Agamemnon guide, Aeneas guide, Achilles guide, Menelaus guide, and Odysseus guide.