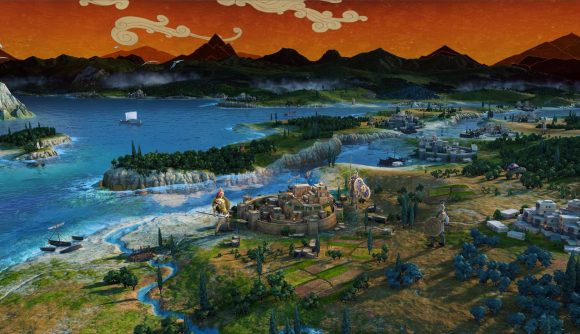 With Total War Sag: Troy being a timed exclusive on the Epic Games Store for the first time in series’ history, fans may be wondering about plans for mods. Not to worry: Troy will indeed get modding support post-launch, even without the usual Steam Workshop framework for it.

The official Total War Twitter account provided some details, explaining that for modders, Troy works like other modern Total War titles. Pack files in the game directory will be moddable as with other games, such as Total War: Warhammer.

Mod support won’t be available immediately on launch. “However upon release, it will not have support for mod/tools hosting and distribution (workshop) and a mod manager in our official launcher,” Creative Assembly says. “[T]his is very similar with our current arrangement on Steam, where official mod support lands one month after launch.”

Total War Saga: Troy is the first Total War game to launch as an Epic Games store exclusive, and it will be free for 24 hours on launch day when it comes out August 13. The plan is to release the game on Steam a year later.

There’s currently no system on the Epic Games launcher analogous to the Steam Workshop – but that’s changing soon, according to Epic’s Trello board for tracking new and planned features for the store.

Please rest assured that our aspiration is to ensure Troy has parity with other modern Total War games with regards to mod support and are working on delivering this as soon as possible. We are actively working with Epic in order to support this feature moving forwards.

In April, Epic posted an update to the modding support card that says the Epic Games Store modding platform is currently in quality assurance testing, and that it will launch with “one Store partner” – likely a reference to Creative Assembly and Troy – and “ramping up from there.”

“We are actively working with Epic in order to support this feature moving forwards,” Creative Assembly tweeted.

Beyond mod support, Creative Assembly has considered some options for post-launch DLC for Troy, including the addition of some of The Iliad’s big-name heroes like Ajax. We’ll have to see what they have in store.

In the meantime, get your conquer on with our list of the best Total War games to date.