The Total War series is known for its vibrant modding community – whether that’s creating crossovers with The Witcher, Lord of the Rings, and Runescape, or adding more playable races to the Old World in Total War: Warhammer 2.

However, Total War Saga: Troy has started its life completely modless, partially due to the fact that it’s a limited-time Epic Games Store exclusive. While a few unofficial mods have surfaced – such as the camera mod that lets you look up the minotaur’s nose – official mod support was announced to have been delayed by “at least a month” back in September.

Now that said month is nearly complete, the developers have delivered on this timeframe and announced that modding is finally coming to the game on October 22. While the Epic Games Store beta tested its modding tools with MechWarrior 5 back in August, this will be the first full release of the feature. The system looks very simple to use – you can just click the appropriately-named ‘mods’ tab on the Total War Saga: Troy store page to access the mod browser.

From there, it’s pretty self-explanatory – you can search or filter mods to suit your needs, as well as sort them by most installs, likes, publish date, or alphabetically. There are also tags that you can toggle to search only for map mods, UI mods, or whatever you’re looking for. Enabling and disabling the mods is as simple as checking a box, and then you’re good to go. 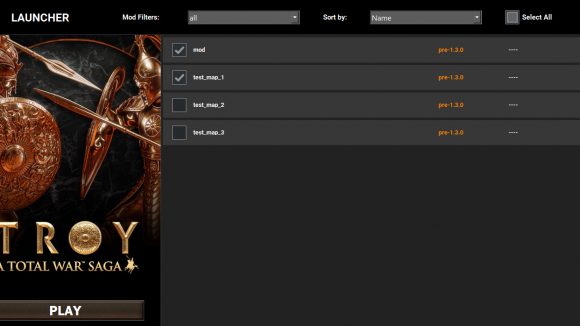 The mod browser isn’t live just yet, but you don’t have long to wait. When the mod browser does go live, you’ll just have to wait for the game’s most creative minds to cook up some exciting – or horrifying – mods for you to add to your ancient Greek warfare. In the meantime, you could always add some mods to your favourite strategy games or check out our picks for the best Total War games to tide you over.