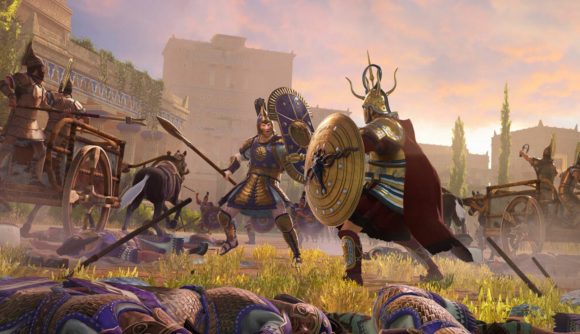 The multiplayer beta for A Total War Saga: Troy is getting an update this week, with a new patch that’s due out February 18 that’s adding quick battles and a chat feature to the mythic strategy game.

Creative Assembly says the multiplayer beta will be adding the quick battles mode to A Total War Saga: Troy – You’ll be able to use quick battles to “find a multiplayer match with a single click” and you’ll be able to “queue up alone or with up to three friends”. The multiplayer beta for Troy began in November, and Creative Assembly says it will eventually include support for custom eight-player battles, co-op campaigning, and community-created maps.

You’ll need to coordinate your command skills in battles, which is why you’ll want to use the new chat feature that’s coming along with this update. Creative Assembly says this will let you talk directly with your in-game friends, and you’ll also be able to create or join existing chat rooms while you’re in the game. That’s always handy, particularly when you’re working out who is supposed to be getting into the giant wooden horse.

Patch 1.5.1 also includes a host of bug fixes and improvements to Troy. Players with slower internet connections or firewalls will be relieved to learn that the issue that caused them to be unable to use DLC they own has been addressed – Creative Assembly says it has “reduced instances” of this occurring.

The 1.5.1 multiplayer beta update is coming tomorrow to TROY!

The update also makes some needed balance changes. Archers have all taken a 20% nerf to armour piercing damage, while javelineers (excluding mythic units) have gotten that stat bumped up by 10%. Chariots have all gotten their turn speeds reduced by half, and all slinger units will reload a bit more slowly – that speed has been reduced by 7-8%.

You can read up on the rest of the changes in Patch 1.5.1 on the official Total War site.